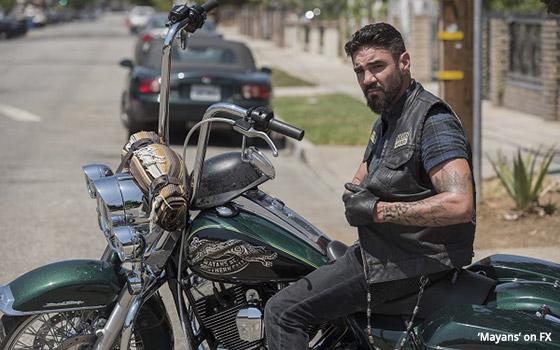 The number of scripted, original series being produced for TV and streaming services continued to increase in 2018, but at a much slower rate than previous years.

But the output is expected to increase significantly in the coming year.

That's the word from FX CEO John Landgraf, a man who makes it his business to know how the TV industry is faring when it comes to keeping the content pipeline flowing with new scripted originals.

FX is one basic cable network whose business model is based on the maintenance -- and more or less continual refueling -- of a lineup of attention-getting original series (such as the motorcycle-gang drama “Mayans,” pictured above).

In an interview with The Hollywood Reporter, Landgraf commented on data on original-series production that FX gathers each year.

This year's tally of scripted original TV shows will come in at 495 across the industry, FX said -- a record, but up only by eight shows over 2017, for a 1.6% gain. For the previous 10 years, the TV production industry ramped up production to the tune of 7% increases each year, on average.

However, FX's audit estimates that 2019 holds the potential for another steep increase as at least three high-profile streaming services are set to come online from Apple, Disney and WarnerMedia.

Content production for those services could add significantly to the tally already in production or planned for 2019 from the likes of Netflix, Amazon and Hulu. And services such as HBO and Landgraf's own FX (now owned by Disney) will also be ramping up production.

Hilariously, Landgraf thinks Netflix is “cuckoo” based on the sheer tonnage of original content the company is always producing.

“What I didn't foresee was the level of aggressiveness and pace of ramp-up the streaming businesses would pursue,” Landgraf said of 2018 -- “particularly Netflix, which is a little cuckoo when it comes to the sheer volume.”

Netflix is estimated to have spent as much as $13 billion on new-content production this year, and is not expected to slow its pace in 2019.

At least six basic cable networks ceased production on original series in 2018 -- TV Land, CMT, VH-1, A&E, E! and WGN America -- although some of them, such as WGNA and CMT, had original series that were favorably reviewed by critics (but apparently under-viewed where it counts -- with audiences).

Where the future of television is concerned, this was the most interesting part of this year's audit. Although some basic cable networks such as FX are still gung ho on producing originals, basic cable generally seems to be throwing in the towel on that business.

Meanwhile, the streaming services, which grow in popularity every day (and win most of the big creative awards and garner the most critical acclaim and attention) are filling the content pipeline at full speed.