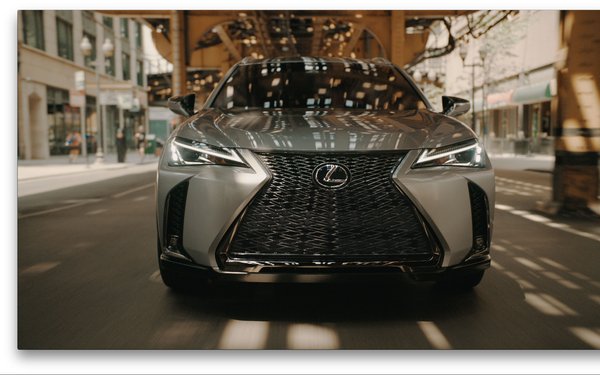 Lexus is breaking a campaign that shows how cities are the new frontier of American culture.

Titled “The New Frontier,” it shows off the new-to-market 2019 UX luxury compact crossover, which was deliberately designed for the city and what Lexus calls the “modern urban explorer.” The automaker defines this group as “those seeking a fresh, contemporary and dynamic take on luxury driving; buyers with an imaginative lifestyle who explore, experiment and defy.”

The campaign shows how cities are a canvas for experimentation and creativity, from new ideas in fashion, food and architecture to artistic expression, says Cooper Ericksen, Lexus vice president of marketing.

The target market is "a younger buyer who is seeking a contemporary and dynamic take on luxury driving," Ericksen tells Marketing Daily. "They’re interested in brands that are still edgy and relevant, but they require a more refined experience. With this launch, we’re intentionally trying to attract younger, more connected consumers to Lexus."

“Plant a Flag” breaks nationally today. Opening with an orange UX driving through a dark, mysterious metropolis, the spot changes perspectives so viewers realize the vehicle isn’t driving horizontally on the road. Instead, it’s driving vertically up the side of a skyscraper, showing that UX is the crossover crafted to the new frontier that's the city.

A second spot, “A Different Frontier,” shows how the UX wasn’t just made for the city — it was made from the city. As the UX makes its way through city streets, the spot highlights how the architecture of urban environments uniquely shaped and inspired the design, technology and engineering of Lexus’ newest luxury utility vehicle.

"The New Renaissance” will air on TV One and BET, with targeted Prime programming. “Mission: Possible” will run across national Hispanic networks like Univision, Telemundo and Discovery en Español. The LGBTQ digital video, “One of a Kind,” will appear on sites like OUT, Advocate, Passport, Revry, Gay Ad Network and Edge Media.

The general market TV spots will air during prime time, cable, late night and sports programming, including during The Academy Awards and NFL Playoffs. Print will run in lifestyle, travel and auto publications including Food & Wine, AFAR, Real Simple and Car and Driver.

The UX will have strong digital presence through online videos and banners across all major social media platforms and popular sites like VICE, Bustle and Vox Media.

To extend the reach of the campaign, Lexus is partnering with key media entities to produce custom content focused around UX.

For example, a partnership with Vox Media’s “Explainer” series this January will examine the ever-changing nature of city streets through product-focused videos.

Lexus and Vice will produce a documentary photo series featuring people who have taken ideas originally conceived for the outdoors and adapted them to work in the urban landscape, thus drawing a connection to the UX.