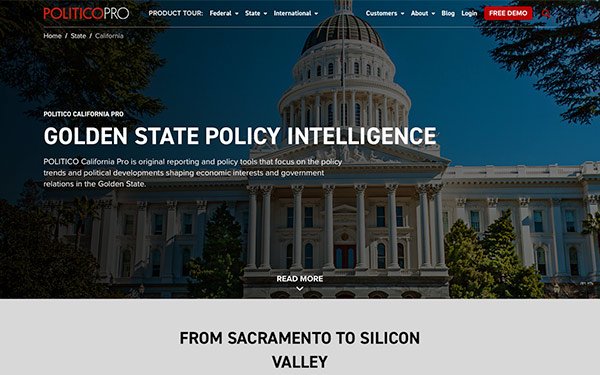 Politico’s subscription-based product has expanded with a new offering that launches today and focuses on California policy and politics.

(Pricing starts at the mid-four-figure range and then varies, based on number of policy areas, users and additional products needed, according to a spokesperson.)

The expansion in California is part of a global push for Politico Pro, which recently moved into Canada and continues to grow in Europe.

California Pro will include a newsletter (available for free since November), as well as original reporting and legislative updates from the state capitol “designed for in-state policy professionals with a stake in California policy and politics,” according to a statement from Politico.

New hires include Kevin Yamamura, editor of California Pro, who previously served as the assistant managing editor of the Sacramento Bee.

Politico has had a presence in California for nearly four years, with California Playbook (its city-focused newsletter) led by Carla Marinucci in Sacramento, Jeremy White in the Bay Area, national politics reporter David Siders in Los Angeles and national health care reporter Vicky Colliver in Oakland.

In December, Politico announced it would make a $3 million investment in its revenue team and client services.

By the close of 2019, Politico anticipates its sales team to expand by 35% and its revenue to increase by almost 40% over the previous two years (since January 2018.)

Politico says it has more than doubled in size over the last five years, growing revenue from $52 million to $113 million in 2018.

In other Politico news, Tim Grieve, the founding editor of Politico Pro and most recently McClatchy's head of news, was hired by Politico publisher Robert Allbritton to lead a new, separate media company unrelated to politics, according to Politico’s"Morning Media" newsletter this morning.

This story has been updated.
government, online publishing, politics
Next story loading