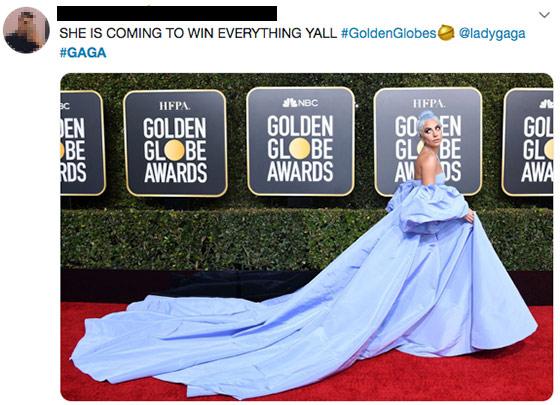 The Star Is Born actress racked up more than 253,000 mentions across social media channels, according to data from social analytics firm Talkwalker.

That was far more than the roughly 139,000 social-media mentions generated by Rami Malek, despite the "Bohemian Rhapsody" star winning the Globe for best performance by an actor in a motion picture.

Malek was followed by fellow Golden Globe winners Sandra Oh, and her more than 127,000 mentions; and Glenn Close, and her roughly 47,000 mentions.

In total, the award show was mentioned more than 2.7 million times across news sites, forums, blogs and social media platforms tracked by Talkwalker.

As for brands, Walmart appeared to win the night with more than 8,100 mentions, followed by HBO and its approximately 4,700 mentions.

The award for most-viewed tweet went to Walmart and its “Famous Cars” ad.

Among social and political movements, MeToo and TimesUp took top honor with more than 10,000 mentions.

Conspicuously absent from Talkwalker’s findings was any mention of “Fiji girl,” a woman hired to hold a tray of Fiji water bottles on the red carpet, whose beauty was much discussed on social-media challenges.