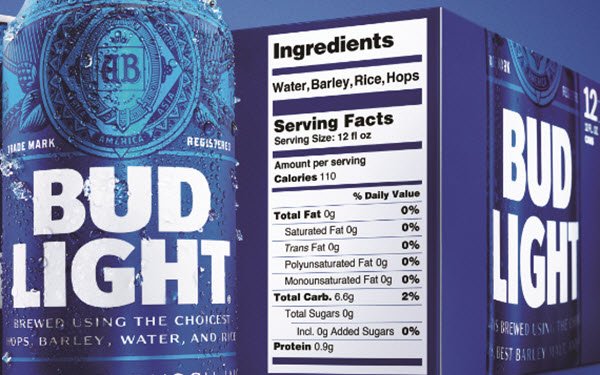 Bud Light is aiming to generate some buzz in the weeks leading up to its two spots in Super Bowl LIII, with a campaign promoting a new, transparent informational label being printed on its secondary packaging.

Two TV spots announcing the label — touted as the U.S. beer category’s first “comprehensive” on-pack serving ingredients and serving facts label (more on that below) — are set to debut during this Saturday’s NFL playoffs coverage.

But one aspect of the creative might end up distracting somewhat from the transparency message.

While these latest TV ads (one below, one here) employ the same medieval kingdom premise used in a plethora of ads over the past 18 months — including a trilogy during last year’s Super Bowl — the now-expected “Dilly Dilly” toast is conspicuously absent.

“We want to be able to use it over the long term, so we don’t want to burn it out,” Goeler tells Marketing Daily.

(In line with the four other AB InBev brands also set to air a combined total of eight ads during the upcoming Super Bowl, Goeler declined to discuss the creative for the two Bud Light ads created for the game, for the time being.)

As for the labeling initiative: Bud Light says that it’s adding on-pack information about serving size, calories, total fat, saturated fat, trans fat, carbohydrates, sugars and protein, plus its four ingredients (water, barley, rice, hops) — in a format that mimics the Food and Drug Administration’s Nutrition Facts label — in response to consumer demand for transparency across products and services.

The news here is the highly visible format for disclosure of ingredients and serving facts.

Since 2013, federal Alcohol and Tobacco Tax Trade Bureau (TTB) regulations have allowed most malt-based and other alcoholic beverages to include truthful, voluntary label statements about nutrients, including calories and carbohydrates, as well as serving facts and statements of alcohol content. TTB’s examples of acceptable serving facts statements are not dissimilar to the FTC’s Nutrition Facts format.

In July 2016, to show “commitment to quality and transparency,” Bud Light parent Anheuser-Busch InBev, along with MillerCoors, Heineken USA and other Beer Institute members, signed a Voluntary Disclosure Initiative (VDI).

The VDI calls for the brewers to “voluntarily list calories, carbohydrates, protein, fat and alcohol by volume on their beer products by including a serving facts statement consistent with [the TTB ruling],” as well as to “provide freshness dating, and disclose ingredients, via a list, a reference to a website with the information, or a QR code on the label or secondary packaging.”

However, while some brands from other big brewers do offer some of this information in small type on cans, bottles or packaging, the VDI only "encourages" participants to achieve compliance across all of their brands by 2020.

Bud Light is the first to put the ingredients plus serving facts info on its cartons (alcohol content and freshness info are on the cans and bottles), in a prominent format. “In our research, we’ve learned that consumers want the same kind of transparency for beer ingredients as for food,” and it seemed to make sense to adapt the format they’re used to seeing on FDA-regulated foods and beverages, says Goeler.

While Bud Light isn’t outright stating that other brands should adopt the same format, “as the lead brand in the category, we believe increasing on-pack transparency will benefit the entire beer category and provide our consumers with the information they expect to see,” he says.

Michael Jacobson, senior scientist for consumer advocacy nonprofit The Center for Science in the Public Interest, issued a statement calling Bud Light's labeling initiative "a good step in the right direction." adding, "but we hope that Anheuser-Busch will do the same for all the other beers in its portfolio, many of which are higher in calories, and put the information on the cans and bottles themselves... Importantly, labels on all alcoholic beverages should also disclose the amount of alcohol".... AB InBev also spells out all ingredients and serving facts, including alcohol content, for each of its brands on its TapIntoYourBeer site.

The brand’s investment in promoting the prominently displayed new disclosure label is also a first, according to Goeler.

In addition to providing added transparency, the label “gives us another opportunity to talk about our four great ingredients,” he says. For a time last year, Bud Light was running ads stressing the simplicity and quality of its ingredients simultaneously with the then-new “Dilly Dilly” campaign ads.

In addition to the two TV ads, the label campaign includes a straightforward announcement/explanatory video for social media/digital, and other content for social and the brand’s website.

The new label will be seen on Bud Light’s secondary packaging starting in February.