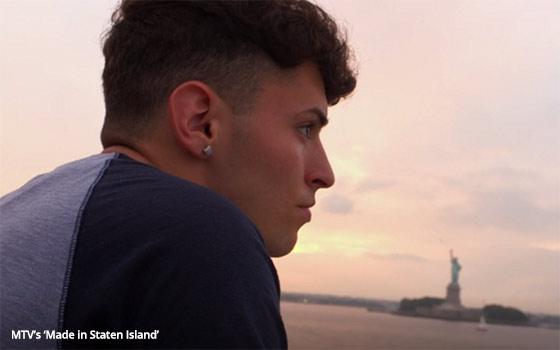 Staten Island residents and some elected officials have been seen on local TV news recently decrying the show’s negative portrayal of their borough, which is represented by a group of young adults whose various parents and grandparents are either made members of the mafia, in prison (or on parole) or both.

In addition, nearly all of these grandkids themselves have had run-ins with the law -- most commonly in situations in which they blew their stacks and violently assaulted somebody (OK, “allegedly”).

This show, whose title is done up in a typeface reminiscent of the “Godfather” movie titles, premiered this past Monday night on MTV.

The other complaint about the show concerns its depiction in particular of the Italian-American community of the Isle of Staten.

Understandably, Italian Americans -- both in Staten Island and elsewhere -- often object to the relentless stereotyping of their community in popular media.

And they have a point. Almost every other group one can name has successfully raised enough fuss whenever they feel their group is being stereotyped, defamed, maligned or otherwise besmirched for the media to get the message and cease doing it.

But not when it comes to Italian Americans. In “Made In Staten Island,” the specimens on display are a bunch of jadrools and mooks, which is the way Italian Americans are almost always portrayed.

In this and numerous other depictions of Italian Americans in TV and movies, the mafia offspring in “Made In Staten Island” make much of their supposed loyalty to friends and family -- a faith in, and reliance on, kith and kin that forms the very bedrock of their lives.

And yet, an outsider looking in might conclude that these families they are clinging to are in severe dysfunction, and that it might be more beneficial to all of them if they would consider loosening the apron strings that tether them to the homes they grew up in.

Gravano is apparently on parole and living elsewhere (you didn't hear it from me, but it's probably Arizona). In the premiere episode of “Made In Staten Island,” his voice is heard on a phone call to his granddaughter in which he is imparting various life lessons.

Essentially, his advice is: Don't be like him -- which sounds sensible. But his inclusion on the show -- as a disembodied voice and in photos -- positions him and his granddaughter as members of some sort of celebrity royal family instead of a felonious crime family.

In fact, the various assaults, fights and subsequent arrests that have involved the participants on this show should have disqualified them for reality television. Instead, MTV makes a TV show about them in which they get to whine about how misunderstood they are.

Meanwhile, Staten Island still possesses many positive residents and traits that more than offset the impression left by “Made In Staten Island” that the borough is little more than a suburb for Mafiosi.

Christina Aguilera was born on Staten Island. Rick Schroder and Alyssa Milano were raised there. And it is possible Steven Seagal lives there. Steven Seagal!

As for those who are complaining about “Made In Staten Island,” they are correct in their opinions about the show. Simply put, it is a new low in television (bet you didn't think that was possible).

Apart from its loathsome stereotyping of Italian Americans, “Made In Staten Island” represents generally a growing category of extremely low-rent reality shows that have come to dominate the schedules on a number of basic cable networks, most notably some of the networks owned by Viacom, and particularly MTV.

“Made In Staten Island” is such a valueless TV show that it is difficult to imagine anyone other than these participants’ loyal family members watching it -- and even for them, this show will put their loyalty to the ultimate test.