For Future Tech, It's Still All About People: Deloitte CIO 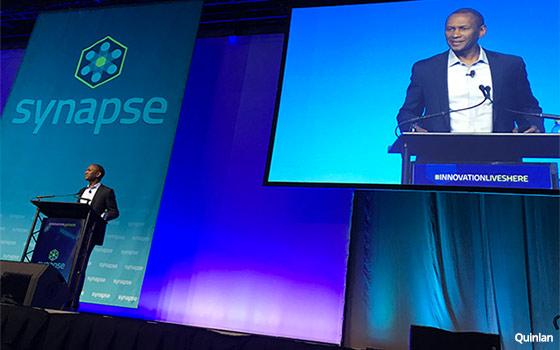 As the Internet of Things brings waves of new technologies to the forefront, new fears of potential backlashes naturally come along with it.

These could range from the idea that robots will replace people to the prospect of cars operating themselves with no need for drivers.

At the annual Synapse Summit in Tampa, Florida, this week, a top tech exec threw some cold water of reality on what the future may really look like.

In his keynote address to some 5,000 attendees, Larry Quinlan, global CIO of Deloitte, suggested that the future may not end up looking like some may think.

Although Quinlan, a well-known and long-time CIO, oversees technology, his comments suggest that people and not technology are the key elements in work, both now and in the future.

He said there were a number of common myths in the market, such as that robots will take over the world resulting in the loss of jobs. A great example he gave was of military drones being flown without a pilot but needing the addition of people to capture and analyze the data from the drone, as well as program it to fly.

Another myth he cited was that AI is taking over the world so all you need to learn is artificial intelligence, noting that AI in one form or another is hardly new.

Quinlan’s other business myths include that corporate technology departments are becoming obsolete and multi-generational teams are too difficult.

Biggest lesson from the tech leader: “I learned in my career that it’s all about people.”