'Breslin And Hamill' Documentary Sheds Light On A Lost World 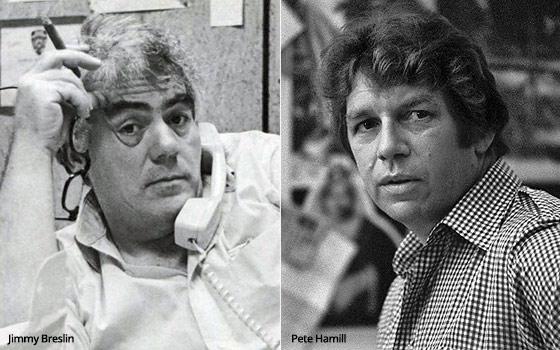 Like the proverbial fish tale, newspaper yarns often get embellished in the telling,  although the stories of newspapers and what went on in the raucous print newsrooms of yesteryear are usually strong enough to stand on their own without embellishment.

I came to this fish tale analogy while watching this new documentary about Jimmy Breslin and Pete Hamill -- “Breslin and Hamill: Deadline Artists” -- premiering Monday night on HBO.

It is not meant as a strong criticism to point out that aspects of the world Breslin and Hamill worked in -- roughly the 1960s to the ’00s -- along with the glories of the style of journalism they practiced feels romanticized here, at least a little.

On the other hand, the romanticizing stems from the documentary's nostalgia and affection for the era in New York City journalism that Breslin and Hamill represented -- a world that for all intents and purposes is now gone.

And it is true that the old newspaper newsrooms were colorful places, and the star columnists were often larger than life, as were many of all the other people who were thrown together there each day, and long into the night.

The documentary tells the stories of Breslin, who died in 2017 at age 88, and Hamill, now 83, in parallel, since they worked in the same time frame, competed with each other, befriended each other and even once wrote for the New York Daily News at the same time.

Evidently, much of this documentary was assembled while Breslin still lived, since he is seen in numerous scenes being interviewed, some of them alongside Hamill.

The film touches on about a half-dozen of the most notorious stories from their careers as famous “cityside” columnists at various papers. Between them, the papers included the New York Herald Tribune, the News, New York Post and Newsday.

The documentary makes Breslin the more celebrated of the two, and as some of the interview subjects point out, Breslin was at one time possibly the most famous newspaper journalist in America.

Hamill was no slacker, however, in the fame department. He was a well-liked and widely read columnist who was also, for a time, a fixture of celebrity gossip columns stemming from the famous women he dated, including Jacqueline Onassis, Shirley MacLaine and Linda Ronstadt.

The documentary tells a warts-and-all story here, although unfortunately for Breslin, his outsized personality gives his life story more warts than Hamill's -- at least according to this documentary.

For those of us of a certain age, “Breslin and Hamill” paints a picture of a lost world -- not only of tabloid journalism as it was once practiced in the era before the Internet, but of an older New York that might not have been as shiny as the one we have today, but was in many ways more poignant.

For those who are too young to have lived in the Breslin/Hamill era themselves, however, this film is an invaluable document of a time and a world they cannot imagine.