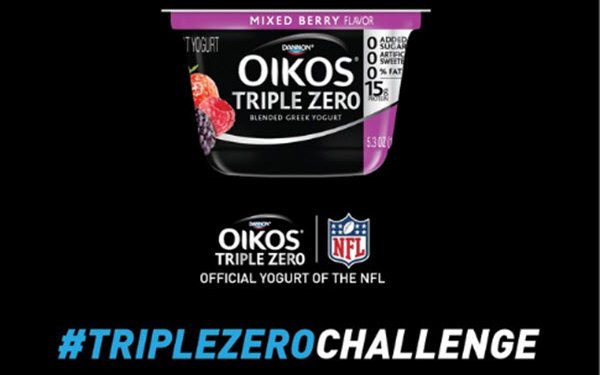 Danone North America has announced it will give away cups of Oikos Triple Zero if this year’s Super Bowl teams rack up at least 1,000 combined yards.

“Super Bowl LIII will feature two of this year’s most productive offenses, putting the 1,000-yard mark, though somewhat rare, well within reach,” says the brand, which is the official yogurt of the National Football League.

Last year’s Super Bowl marked the first time in NFL history that the teams logged over 1,000 yards, and also featured the all-time single-game record for total offensive yards (1,151). During the 2018 regular season, teams combined for 1,000 yards or more in three of the 256 games.

If the teams meet the brand’s “#TripleZeroChallenge,” fans can visit the promotion site between Feb. 25 and March 4 to check whether their state is among those included in the promotion (the offer is precluded by some states’ laws). If they’re eligible, they can download a printable coupon good for a 5.3-ounce cup of the yogurt, redeemable at participating retailers on March 4.