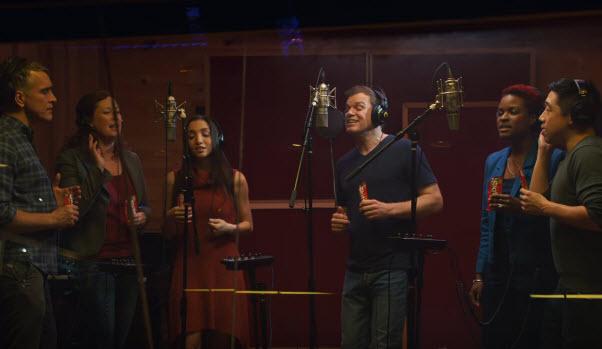 Skittles is ramping up the buzz for its Broadway musical, set to open (and close) on the afternoon of Super Bowl Sunday.

The Mars Wrigley brand and DDB Worldwide have released a 1:40-minute video (below) showing the star, Michael C. Hall, and the cast rehearsing a number called “Advertising Ruins Everything.”

It what may be the ultimate irony, given the context, the song appears to back its title’s anti-advertising message.

It starts with Hall singing, “Stop your moralizing… I don’t’ see the problem with advertising,” but then has other cast members complaining that advertising ruins the web, TV, email and Instagram, and encourages inferiority feelings. (“I wish I was happier, but I feel crappier with this new face that I bought.”)

By song’s end, Hall is agonizing about whether he may have “ruined Broadway by being in this ad tonight,” and vowing, “I will never make an ad again so long as I can act.”

Does the full 30-minute extravaganza, dubbed “Skittles Commercial: The Broadway Musical,” conclude that advertising is a negative force in the world? Those in the 1,500-member audience at New York City’s The Town Hall will be the first to find out.

The creative team is also using a 15-second version of the video to promote the musical.

Proceeds from the show’s tickets, being sold on Ticketmaster, will be donated to Broadway Cares/Equity Fights AIDS.