Memo To Sponsors: Please Can The Sad Super Bowl Spots 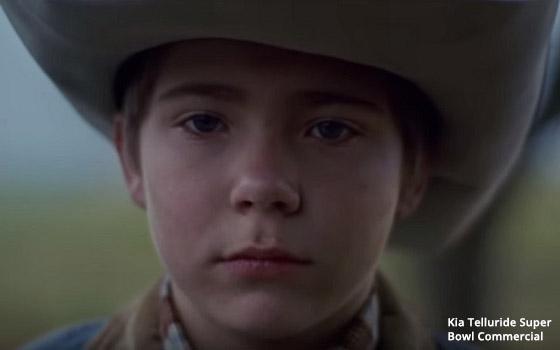 The face and voice of a sad little boy has no place in a joyous, fun environment such as the Super Bowl.

This is why, for me, the Kia Telluride Super Bowl commercial emerged as the game's worst commercial during the big show Sunday on CBS.

When this commercial came on, I really could not believe my eyes and ears. This was the one in which the lad pictured above suddenly appeared and began to narrate the ad in the saddest monotone the spot's directors could elicit from him.

In a forlorn voice, he described his hometown -- a place called West Point, Georgia -- in terms so desolate you might have thought he was describing a town that had been deserted in the Dust Bowl of the 1930s.

And then he droned on about the anonymity of the town's residents, as if the town's apparent paucity of famous people represented a black mark against it.

At long last, the spot concluded with an attempt at an upbeat ending. “No, we are not famous,” said the sad little boy, lamenting his town's acute fame deficit. “But we are incredible, and we make incredible things,” he said joylessly. The “incredible things” were these Kia Tellurides, which are being built in West Point.

Unfortunately, by the looks of them, these townsfolk seemed pretty unhappy, despite the availability of this factory work. This leaden commercial had the effect of stopping any fun you might have been having watching the game dead in its tracks. One thing it didn't do: Make you excited about the Kia Telluride.

While this spot was the worst example on Sunday, all of the Super Bowl ads that attempted to deliver messages of vital importance about social or emotional issues had this same deadening effect.

For example, late in the game came a spot for The Washington Post voiced by Tom Hanks that inventoried a handful of national tragedies and paid tribute to journalists who had been killed in the pursuit of their profession. It was then followed immediately by an upbeat promo for the Grammy Awards.

It should go without saying, but these two kinds of ads are not compatible with each other. The latter is more appropriate for a telecast such as the Super Bowl. Moreover, it had the effect of completely negating the sad, “important” message of the WaPo ad (“Democracy dies in darkness”).

The ad that earned runner-up in the biggest bummer category was Hulu's spot for “The Handmaid's Tale.” It started with upbeat messages about “morning in America,” but eventually ended with the words “Wake up, America, morning's over.” Hulu reportedly operates in the red to the tune of many hundreds of millions of dollars. Go figure.

These inappropriate sad commercials were not the worst moments in the Super Bowl telecast, however. The worst was the moment Adam Levine removed his shirt during the halftime show. The halftime entertainment overall was one of the worst seen in recent memory.

Speaking of entertainment, the high point came before the game when Gladys Knight sang the national anthem. She is a national treasure.

And hats off to plucky on-field CBS Sports correspondent Tracy Wolfson, who somehow battled her way to the center of that very aggressive and tightly bunched media scrum that surrounded Tom Brady on the field after the Pats’ victory. Her effort to stand her ground and conduct a coherent interview should earn her a bonus.

As for the game itself, many are calling it a Super Bore, thanks to its low score. But in the same way that some people love pitchers’ duels in baseball, this battle of defenses made for riveting televised football.

And the Patriots’ victory was a storybook ending for a true sports dynasty, even if many people say they dislike the Pats. Oh, well, as Yogi Berra might have said about them: “Nobody likes the New England Patriots. They're too popular!”