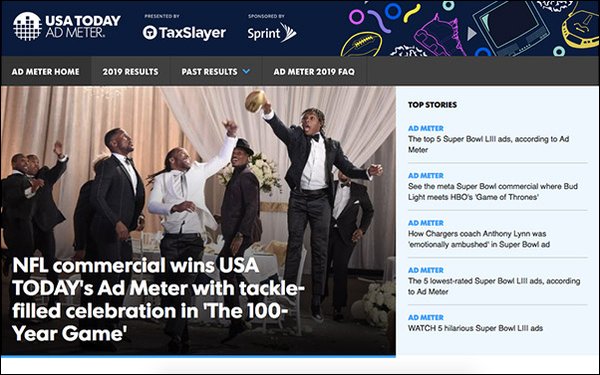 For the past 31 years, USA Today has gauged audience reaction to brands’ Super Bowl commercials through its Ad Meter platform, presented by TaxSlayer and sponsored by Sprint.

According to this year’s results, the NFL’s “The 100-Year Game” commercial was the most popular, with a rating of 7.69.

This year marked the first time the NFL has taken the top spot in the Ad Meter rankings. The ad features popular players, both legends and newly minted, at a black-tie dinner to celebrate the league’s upcoming centennial, only to see the evening turn into a humorous brawl over a golden football.

The least popular ad was presented by Burger King, called “#EatLikeAndy,” which featured a video of Andy Warhol eating one of the chain’s burgers. The footage was taken from the 1982 documentary "66 Scenes in America" by director Jorgen Leth.

The ratings are culled from votes cast by tens of thousands of registered panelists.

Voting began on Wednesday, Jan. 30and ended at 1 a.m. Eastern time after the game ended.

Each panelist was required to rate every eligible ad that aired between the coin toss through the end of game regulation.

Popular Super Bowl brand Anheuser-Busch, which is rumored to have upset corn farmers with this year’s anti-corn syrup Budweiser campaign, has regularly been in the top spot. But it fell to Hyundai in 2016, Kia in 2017 and Amazon in 2018.

This year the company’s ads for Budweiser fell in 8th, 16th, 17th, 37th and 43rd place. Spots for Michelob Ultra fell at 51st place, with an ad for its Pure Gold product, and 36th.