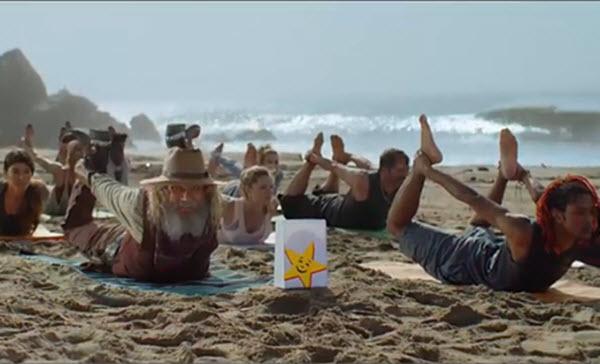 Now, the lads are getting another shock: a new campaign from Carl’s Jr. that not only promotes plant-based charbroiled burgers… but features yoga on the beach.

The chain announced last month that it had partnered with plant-based protein innovator Beyond Meat to offer the Beyond Famous Star burger — a flexitarian take on its most popular menu item, the Famous Star beef burger.

On Sunday, it debuted its first TV ad for the plant-based burgers, with a buy in the Los Angeles market during the Super Bowl.

For those who fear that Carl’s Jr. might lose its sense of humor as it tries to attract a broader customer base, the good news is that the new ad — for the Beyond Famous Star with Cheese — acknowledges the humor in a burger chain offering such a trendy item, while still promoting its tastiness.

The 30-second ad (below), from the Arnold agency, takes place during a yoga class on chichi Malibu beach, but the pretentiousness is countered by its narrator: a grizzled dude who looks left over from California Gold Rush days, who out-yogas the toned practitioners around him.

The ad will be airing in all of Carl’s Jr.’s markets in the weeks ahead.