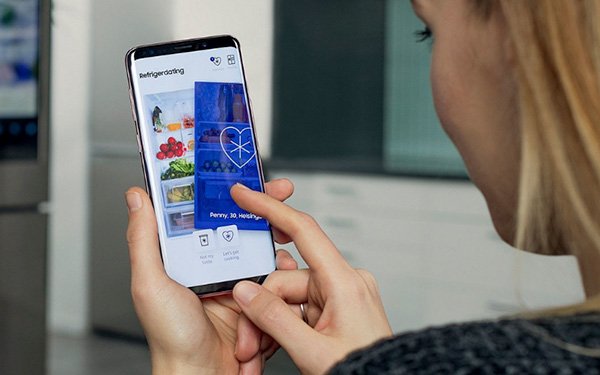 Just in time for Valentine’s Day, Samsung has launched a dating feature based on what’s in a person’s refrigerator.

The “Refrigerdating” service aims to match the contents of different refrigerators, such as through the touch screen on Samsung’s Family Hub refrigerator.

“Refrigerdating is a service that helps you to find love based on the content of your fridge,” states the Samsung feature announcement. “By uploading an image of your food, you can get in contact with others who have realized that you are what you eat. Simply upload an image and let the world know what kind of person you are. Refrigerdating will then hook you up with a variation of fridges, of different tastes, to pick and choose from.”

The dating feature works with the $4,000 Family Hub refrigerator via an upload to the Refrigerdating website. Users need to add a short bio and contact information, such as a phone number or email address.

“Users will get access to fridge photos uploaded by others, and they can either select ‘Not to My Taste’ or ‘Let’s Get Cooking,’” stated Aman Jain, a Samsung senior engineer in a blog post.  “The app works like the Tinder dating app by allowing users to swipe right or left to scan through the contents inside other users’ refrigerators.”

Consumers who do not have a Family Hub refrigerator can take a photo of the contents in their refrigerator. The idea originated from Sweden, which has a large population of singles, according to Jain.