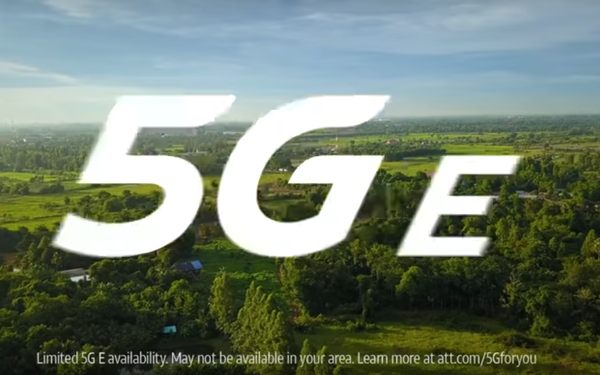 Sprint has filed suit against AT&T for using a “5GE” appellation to describe its new phone offering that is actually just souped-up 4G technology. It has asked a federal court to enjoin AT&T from using the phrase -- which it calls false and deceptive -- in advertising, promotion or on the phones themselves.

On its website, AT&T does explain that 5GE (the E is for Evolution) is actually its existing 4G LTE with advanced features.  But it may not seem that simple to consumers.

“AT&T has employed numerous deceptive tactics to mislead consumers into believing that it currently offers a coveted and highly anticipated fifth generation wireless network, known as 5G,” the complaint says. “What AT&T touts as 5G, however, is nothing more than an enhanced fourth generation Long Term Evolution wireless service, known as 4G LTE Advanced, which is offered by all other major wireless carriers.”

It continues, “AT&T’s deceptive ‘5GE’ campaign is an extraordinary promotional effort that is just beginning to flood the marketplace.”

The suit says that because consumers are so anticipating 5G -- which will be faster and far better than the wireless service they’re used to -- the ads may now make them believe AT&T is giving it to them. That’s to the harm of Sprint and other competitors that have yet to market 5G, beyond some experimental markets.

Filed in the U.S. District Court Southern District in New York on Thursday, the complaint is a good primer on some aspects of wireless marketing, noting the “extremely saturated” wireless market is  mainly served by Sprint, AT&T, Verizon and T-Mobile, and implying that a tall story can go a long way: “In light of the highly saturated market, any perceived advancement in technology or in the capabilities of a service provider’s wireless network can give that service provider a significant competitive advantage over other wireless companies that can last for years.”

Sprint says in a survey it commissioned 54% of consumers believe that AT&T’s 5GE network uses 5G “or better,” according to the suit, and 43% believe that if they purchase an AT&T phone today, it will be capable of running on a 5G network. That’s not true.

AT&T introduced the 5GE brand two years ago but without much fanfare. Since it was broadly introduced in advertising last month, technology publications have pummeled AT&T for its “fake 5G” as it’s been popularly dubbed. “AT&T pulled a fast one on the industry,” wrote the website Android Authority.  “Many called AT&T out for this egregious move.”

AT&T today said it will continue to deploy 5G Evolution and said customers “want and deserve to know when they are getting better speeds,” which 5GE supposedly does give.

“We understand why our competitors don’t like what we are doing, but our customers love it,” the AT&T statement read.

The complaint contains snippets from several critical stories, copies of the ad and logos -- and a widely reported boast from AT&T Communications CEO John Donovan  at the Consumer Electronics Show, seeming to relish the anguish the 5GE designation was causing other wireless carriers.

“If I now occupy beachfront real estate in our competitors’ heads, that makes me smile,” he said at the time. “Every company is guilty of building a narrative of how you want the world to work. And I love the fact that we broke our industry’s narrative . . .  and they’re frustrated and gonna do what they’re gonna do.”

T-Mobile is awaiting approval of a $26 billion merger with Sprint that still needs regulator approval, and has received some opposition because it will narrow the ranks of major wireless providers from four to three.