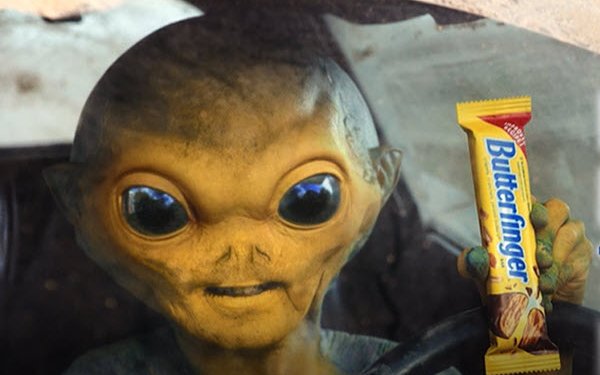 Butterfinger — one of the brands acquired in Ferrero’s $2.8 billion acquisition of Nestle’s confections business last January — is touting an improved recipe with its largest campaign in over a decade.

The nearly 100-year-old brand now uses a larger type of peanut and more cocoa and milk for a richer chocolate coating, and has eliminated hydrogenated oils and the preservative TBHQ.

The bars, now at retailers across the country, also feature a brighter-yellow wrapper that’s double-layered to preserve freshness.

Ferraro is supporting the major revamp with a “Better Butterfinger” campaign from lead creative agency Pubbliregia.

The campaign features an ad being run across cable and network channels and social media, as well as a new website.

The ad (30-second version for TV; 60-second version below) introduces an alien character who comes out of a suspended state when he gets wind of the “better Butterfinger,” and goes on a tear in a sand-covered Camaro in a mission to take possession of one of the bars.

The brand’s longtime tagline has been updated with the addition of the operative adjective: “Nobody lays a hand on my better Butterfinger.”

Ferraro’s advertising push represents a doubling of what was spent on the brand in recent years, Kristen Mandel, senior director of marketing for Ferrero-owned Ferrera, told Business Insider.

"The priority is really bringing Butterfinger back into the spotlight as a modern-day icon, because it hadn't gotten the attention it warrants in recent years," she said.