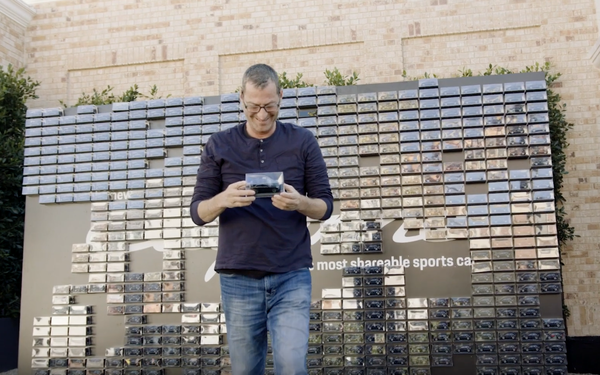 The automaker gave away 750 Porsche Cayennes — the cars were models, only 1:43 of scale. The models were affixed to a wall that was set up at a takeover of the upscale Palisades Village in Los Angeles. The experience encouraged people to take models from the wall.

Cramer-Krasselt, which executed the promotion, also filmed the Cayenne Model Wall being built, shared and enjoyed in a 30-second time lapse video. The video launches today with paid support on Facebook and Instagram.

“Sharing” has been a theme for the car, which unlike traditional small sports cars, is an SUV with five seats which allows owners to share the sports car experience with others.

“What I love about this idea is the engagement it begs, the way it literally puts a Porsche in your hands,” stated Marshal Ross, C-K chief creative officer. “It’s also a really smart way to get people to think about the sports car experience in a new way, a social way. That’s the thing about sports cars people don’t often recognize: They’re fun to drive. But they’re really fun to share.”

The Porsche takeover of Palisades Village also included a variety of other executions, including virtual reality racing simulators, OOH and geo-targeted social filters.

Each execution falls under the larger “Sportscar Together” which showcases different ways people can share the Porsche experience. It’s also expanded the brand’s target audience. Past work and events includes Sportscar Together Day, Carpool Karaoke and the Porsche wedding.

C-K is lead creative agency for Porsche. PHD is the lead media agency.