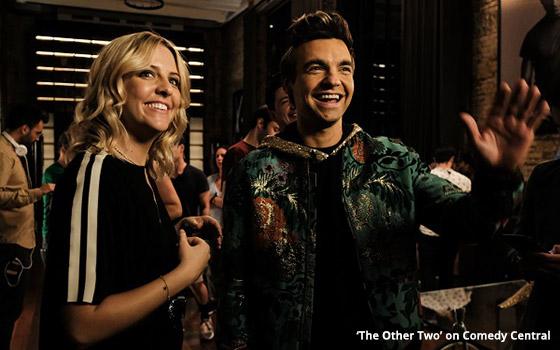 The premiere episode of “The Other Two,” a new Comedy Central series that premiered January 24, was so repellent that I never made it to the end of it when previewing it for a possible review last month.

Lacking the fortitude to get through a show whose running time without commercials is only around 20 minutes really says something about the show.

While watching this one, I encountered so much needless snark and vulgarity spewing from the mouths of this show's characters that I suddenly felt the need to abort the whole exercise.

On that particular day, I simply did not feel like writing yet another scathing review of another new TV show. Yes, it is true -- a critic can sometimes grow tired of criticizing and writing negatively so often. So on that day I moved on to some other subject.

Cut to the present week and a news release arrived from Comedy Central announcing that “The Other Two” had earned a renewal for a second season barely three weeks after it started its first one.

So with the intention of writing a blog here about the woeful state of scripted comedy on basic cable symbolized by this renewal of a show that was one of the worst I had seen recently, I went back to look at another episode of “The Other Two.” And lo and behold, this particular episode (I believe it was the second one) was excellent.

The title of “The Other Two” refers to two siblings -- a brother, 28, and sister, 30 (played by Drew Tarver and Helene Yorke, pictured above) -- whose 13-year-old younger brother has suddenly blown up into a teen idol pop star.

The rise of Justin Bieber seems to be the model for this young star who shot to fame based on a video he posted on social media. His first name happens to be Chase, so the name he has adopted (or been given) for his career in pop music is Chase Dreams.

As a result of their brother's sudden superstardom, the two older siblings suddenly find themselves utterly anonymous by comparison. The show's comedy is based on the contrast between their lives and their brother's.

In the series' second episode, their lives intersected with his when they attended a premiere for a movie in which their brother was somehow involved. The resultant after-party event was a satiric gem as the two hapless sibs interacted with a gaggle of beautiful people.

These were mainly teens and young adults who had already made so much money as models or actors that some of them had already retired, and others were discussing how to set themselves up as mini-corporations.

For a show that just a few weeks earlier emerged, for at least one episode, as the worst new show of the year so far, this episode represented a complete turnaround. Instead of vulgarity and immaturity, the writing was suddenly sharply funny and original.

In the annals of my own personal writing of TV reviews, this almost never happens. As I mention to people from time to time, I am the king of watching one episode of most TV shows -- the premiere episode.

I do not watch subsequent episodes of most TV series to see how they are faring several episodes into their inaugural seasons. There are just too many new ones forming a line in advance of their premieres that I have to get to.

Thus (and perhaps unfortunately), the opinions formed here are almost always based on pilots and premiere episodes, which are often not the best ones. If this experience with “The Other Two” teaches me anything, it is that perhaps I should try harder to follow up on some of these shows. Message received.