Tide Now Making It Easier To Do Wash 'On Demand' 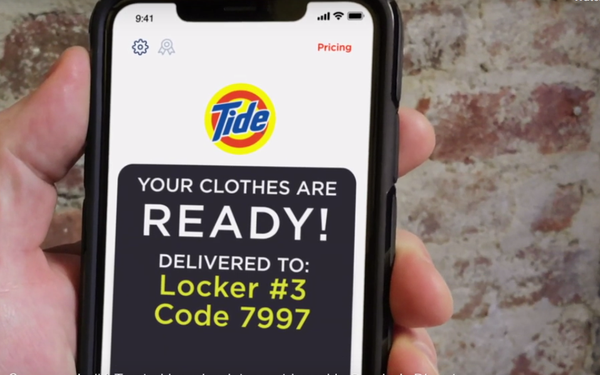 Procter & Gamble’s Tide brand plans to get into the out-of-home laundry business in a big way, hoping by the end of next year to have 2,000 Tide Cleaners locations where workers will do your wash “on demand.”

Tide has been in the out-of-home laundry and dry cleaning business for a decade without much fanfare, with about 800 locations nationwide that operate as franchises and have tested the best “frictionless” ways to operate.

Tide Cleaners now adds what the company says is a more “holistic” approach to the business, branding it in a new way. A Tide Cleaners smartphone app can tell customers where drop-off points are located and also when clothes are ready to be picked up. The app gives a modern, branded spin on the old idea of letting someone else wash, dry and fold your clothes, and also, perhaps, do your dry cleaning.

The company is scouting more locations. P&G says “consumers, building managers, interested franchisees and retailers can request that Tide Cleaners consider opening a location in their city, building or on their campus by going to www.tidecleaners.com/start.”

A recent survey from the American Cleaning Institute says cleaning the bathroom is the most-loathed household chore, by a wide margin. Doing the laundry, though, is fifth, behind cleaning the kitchen, dusting and mopping.

“Many people believe that in order to get laundry done right, they have to do it themselves,” said Sundar Raman, vice president of P&G’s North American fabric care business. “Tide is taking this challenge head-on and aiming to give people clean, cared-for clothes and some time back. This new service will complement our existing business, and give people the option to get the Tide clean they deserve on their terms, not on their time.”

The Tide Cleaners concept operates in a few different modes. In Chicago, Washington D.C., Dallas, Denver, Philadelphia,  Boston, and Nashville and also in P&G’s hometown Cincinnati, consumers can leave their laundry 24/7 at drop boxes in some apartment and office building locations and storefronts. They’re delivered back to individual lockers. That model is expanding with 350 new boxes installed every month, and going to more cities.

Also, P&G is installing drop boxes in existing stores, like supermarkets, so shoppers, as they do with Redbox video rentals, can do more than just their grocery shopping.

Tide is also opening its own 24-hour stand-alone laundries, most of them owned by local franchisees. It already has 125 of them in cities that include Houston, Phoenix and Omaha.

And for younger consumers, Tide has started on-campus van pick-ups and deliveries.

“To start the service, parents or students can purchase a monthly laundry plan and deposit laundry in a customized Tide Cleaners laundry bag,” a press statement reads. The service already exists on 20 campuses, including the University of Alabama, Indiana University and Southern Methodist University,