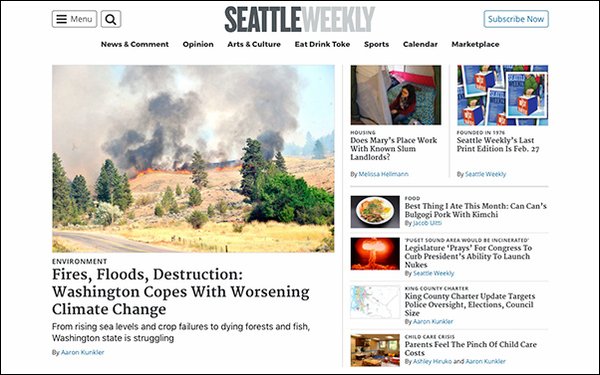 The Seattle Times reports  the paper’s owner, Sound Publishing, will shift the paper to a web-centric format following its final print edition this week. It enjoyed a 42-year print run.

In addition to shuttering the paper’s print edition, the publication’s three remaining editorial staff members will be laid off.

Going forward, the digital publication will cull its content from freelancers, the paper’s archive and Sound Publishing’s other regional publications, such as the North Kitsap Herald and the Bellevue Reporter.

Until the 1990s, Seattle Weekly was a paid publication, catering to young, educated professionals with a blend of cultural criticism, political and sports coverage and regular focus on the city’s cultural and economic growth, reports TheSeattle Times.

It became a free newsweekly in the 1990s, but by the early 2000s, the paper was hit hard by lost revenue, due to the popularity of Craigslist and income siphoned by other digital platforms.

The paper attempted to resuscitate itself in 2017 by cutting its staff from 24 to a remaining three employees.

Seattle Weekly founder David Brewster, quoted in The Seattle Times, said he felt the paper have been “on life support. It hasn’t made financial sense for quite a long time, unless there was an owner really trying to build it up.”
death of print, digital, newspapers, online publishing, print
Next story loading