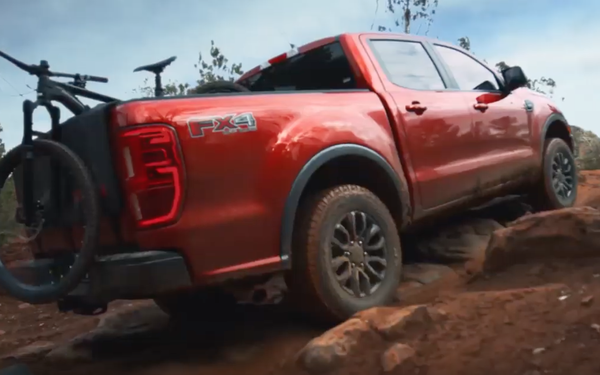 With the theme “Tough Has More Fun,” the effort features 15 adventure athletes captured by Outside TV. It includes localized TV, in-cinema and social media created by Global Team Blue.

“This campaign is Ford putting a stake in the ground in terms of product proposition,” Lisa Schoder, Ford U.S. media intelligence and strategic planning lead tells Marketing Daily “Ranger is no compromise, highly capable and lives up to Built Ford Tough. Now that we have Rangers out on the road and in the wild, it’s the right time to show what it can do as the ultimate adventure gear.”

"Tough Has More Fun” spotlights professional adventure athletes using the all-new Ford Ranger as the ultimate piece of gear to get to their adventure. One of the athletes featured is snow surfer Eric Willett, who bears a striking resemblance to snowboarder Shaun White.

National television kicks off with “Strange Creatures” featuring the human inclination for adventure, while Boston, Los Angeles, Denver, Phoenix and Seattle markets also see the launch of localized social and digital advertising. These five cities will also host weather-triggered billboards that update adventure visuals based on weather changes that occur in each city.

A 2-minute national montage features footage from each of the cities. A 2-minute film was also created specifically from the Denver footage.

TV and social spots include base jumpers diving thousands of feet into an Arizona canyon, using Ranger as a chase vehicle to capture the soaring athletes and their gear, and snow surfers descending Seattle mountains without traditional bindings, crossing rough terrain to reach untouched powder in the new Ranger.

“We cover the whole gamut of mediums to reach the customer, wherever they are in the U.S. and wherever they consume media,” Schoder says. “We asked, ‘What kind of gear are they searching for in L.A. versus in Denver? How can we get closer to customers and show how Ranger can get them to whatever adventure they seek?’ This campaign is how we do that.”

The brand has an intensely loyal owner base, even though sales of it were discontinued in the U.S. in 2011. Since the automaker began making the vehicle in January, the small pickups have been flying off dealer lots, sitting on them an average of only a week before they are snapped up by a buyer, sources tell Marketing Daily.

After narrowing down the featured cities, Ford determined which adventures to highlight in each based on search trends of traditional and emerging activities.

This hyper-local approach is a first for Ford trucks, taking interest-based targeting to the next level with activities to match consumer interests within each city. “Tough Has More Fun” is also the first time Ford trucks will spotlight adventure athletes, most of whom call their adventure-feature cities home.