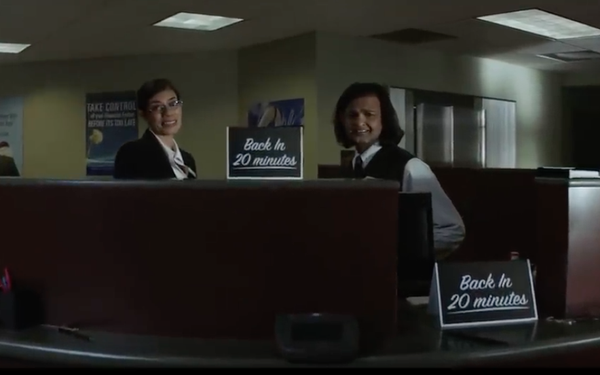 While Yelp reviews might be essential to finding a good restaurant or dry cleaner, less than a quarter (23%) of Americans turn to reviews when selecting a financial services provider.

Financial services provider Ally Financial recently launched a campaign that illustrates the power of ratings by humorously depicting what can go wrong when a consumer chooses to ignore product or service reviews. A comedic 60-second “The Name Is The Idea” spot already has more than one million views on YouTube.

The campaign, the first work from Ally’s new AORs — Anomaly, R/GA and MediaCom — shows what can happen when you choose a plumber, tattoo artist or others with less-than-stellar reviews.

That spot and three 30-second spots, “Sushi,” “Dentist,” and “Mechanic” will air in major prime-time and sports programming as well as online advertising and social media throughout 2019. Ally also is running “Mediocre Ads for Mediocre Things” in online pre-roll, including what appear to be ads for a local dentist and mechanic.

"The campaign aims to shake people out of their complacency to realize that a better bank is out there,” stated Andrea Brimmer, chief marketing and public relations officer at Ally. "You'll see our spots on television, but also in context where consumers are looking at ratings for things like online purchases and restaurants."

However, many banks aren't highly rated and customers often express frustration with their current bank. E-Score Brand research shows that only 19% of customers love their "big bank," while 75% of consumers have never even considered switching their current account.