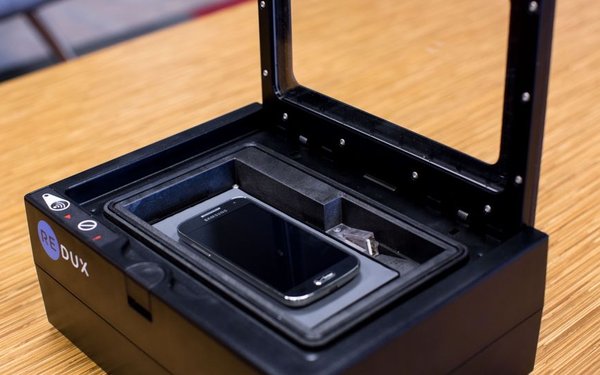 The classic way to start a business: Notice a problem everybody has. Discover there’s no real solution. Find that solution. And then get to market.

Redux, based in Carmel, Ind., claims to have done this.

Since 2014, it has marketed a device about the size of a printer that will take your soggy, dead smartphone and most likely give it life again. Redux says its process, which takes about an hour or less, is successful about 84% of the time.

That seems to beat the most popular second option of burying your phone in a bowl of rice and hoping that the grain will suck all the water out.

Right now, Redux offers the service at about 2,200 authorized Verizon resellers, priced at $29.99 for a two-year contract. That gives you the opportunity to be clumsy twice in that time span. And if Redux fails the first time, you get your money back.

About eight years ago, Joel Trusty’s wife put her phone through the washing machine. Trusty, with a manufacturing background, had an idea about how to save it. He took the phone to work and popped into a vacuum chamber used to extract gases from polyurethane.

He figured that by turning the water inside the phone to a vapor, the gases would just leak out of the phone. It worked. The phone was saved.

He approached his neighbor, Reuben Zielinski, who had advanced engineer degrees and an MBA, and got to work identifying the 16 steps that made the process work. By 2011, they had produced a small prototype. Soon, Trusty and Zielinski founded the business.

Redux now has around two million subscribers --a million of them in the last 18 months, says James Shrake, director of market development.

The company worked to make the machine simple enough it didn’t take smartphone sales people a lot of training to understand it. Owners of smartphone stores want their sales staff selling phones.

The speed of the process itself can’t be sped up. “We can’t do it any faster than it takes to boil water,” says Zielinski.

Adds Shrake, “We haven’t seen anyone complain so far about the time it takes, because there’s not any other solution that gives same-day recovery.”

Zielinski just imagines all the gaming enthusiasts who might need rescuing.  And what about putting units on college campuses? Or letting companies lease a unit so employees could save their phones -- and laptops -- when accidents happen?  So they're working on a larger laptop-sized unit.

But next step seems to be expanding to all those stores that sell AT&T, T-Mobile, Sprint and other cell phone brands.  The Verizon authorized resellers got a such a strong foothold because the owner of Cellular Connection, a big Verizon dealer, invested in Redux.

“We’ve got several trials going on,” Zielinski saiys. “We’re very prepared to produce a lot of these things very quickly" -- and, he notes, Redux products are also built in this country. “That was really important to us.”