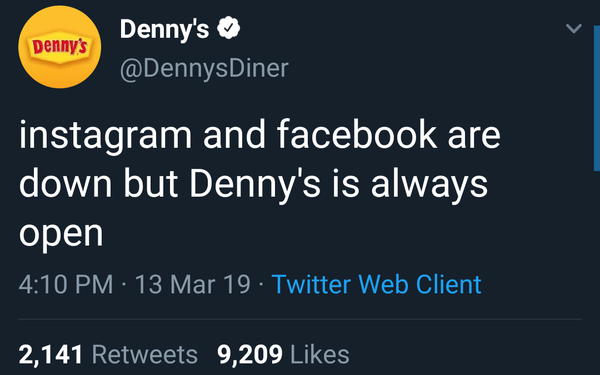 The 1,330 Retweets and the 5,767 Likes as of 5:12 P.M. Eastern Time demonstrates that people still have a sense of humor, but the day-long outage is anything but funny for Facebook and its advertisers.

Facebook Ads Manager, the company's advertising platform, also took a hiatus from producing many millions of dollars daily in ad revenue. For the fourth quarter in 2018, the company reported $16.6 billion in ad revenue.

Facebook and Instagram have been down for the better part of the day worldwide. The message “Sorry, something went wrong. We’re working on getting this fixed as soon as we can” greets those trying to get into the site at the door.

Facebook also took to Twitter to tweet: “We're focused on working to resolve the issue as soon as possible, but can confirm that the issue is not related to a DDoS attack.”

DoS or denial of service attacks occur when one system is targeted by multiple compromised systems that are often infected with a Trojan.

Perhaps a coincidence, or maybe not, Facebook, Instagram, Messenger, and Oculus were not the only platforms that went down today. Google Gmail, YouTube and Docs also experienced outages.