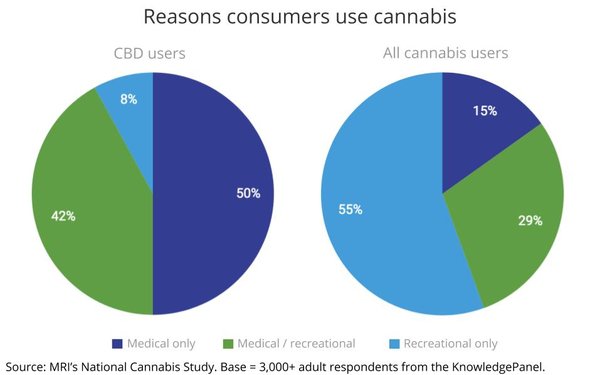 Two distinct consumer segments are emerging within the burgeoning U.S. cannabis marketplace: one predominantly using the hemp derivative CBD for medical benefits and others using cannabis mainly for recreational reasons.

That’s the finding of new data published by media-planning researcher MRI as part of its recently conducted National Cannabis Study.

Fully half of those identifying as CBD users cited medical benefits, while only 15% of all cannabis users asserted the drug’s medical applications.

The study estimates that 36 million American adults identify themselves as cannabis consumers, with about 10% (3.7 million) users of CBD products.

CBD, or cannabidiol, is one of a variety of cannabinoids produced by cannabis plants, and clinical research has shown that it has health and medical-related benefits for treating anxiety, cognition, movement disorders and pain, among others.

The study also segments cannabis users -- both medical and recreational -- in terms of their media consumption patterns and MRI’s analysts have already found some interesting insights.

“One interesting twist we discovered – the CBD consumer is equally comfortable with digital and traditional media,” and MRI spokesman said, adding: “While their use of streaming TV and smartphones is substantial, we also see that 75% have read one or more magazines in the past 30 days, and 90% listened to at least a half hour of radio in the past seven days.”