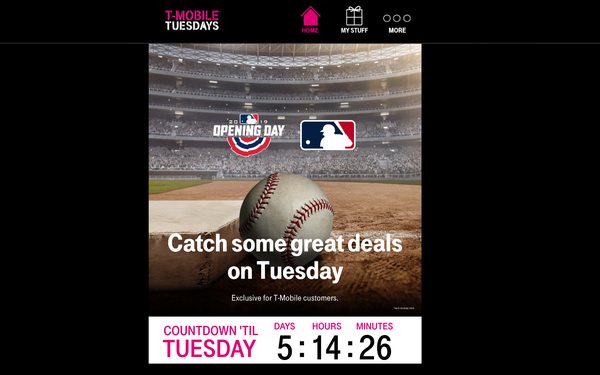 T-Mobile, possibly the most giveaway-happy of the wireless carriers, is again offering a free year’s subscription of MLB.TV and MLB At Bat via a T-Mobile app. That’s a $119 freebie to new and existing customers.

Theso-called UnCarrier has offered the same deal for the last three years, with T-Mobile users streaming nearly three million hours of MLB games last year, twice as much as the year before, says John Legere, T-Mobile’s CEO and pitchman.

TheMajor League Baseball season officially began Wednesday at 5:35 a.m. -- but if you missed it another game gets played Thursday at the same ungodly hour. Soon, the long baseball season will begin in earnest, with games played at more regular hours, and also, mostly the U.S. (These first two were scheduled for Tokyo.)

This year the deal comes with a particularly showy promotional piece: The carrier is once again title sponsor of the T-Mobile Home Run Derby during All-Star Week in Cleveland, a popular fan event -- but one that's likely to be even more so for players. That’s because the winning player now gets $1 million, which on MLB monetary scale is nice walking-around money compared to the $125,000 in chump change awarded last year.

Major League and Little League are somewhat in the same boat -- worried about a generation of kids who are indoor creatures and not playing sports as much.

The MLB.TV offer is available through T-Mobile’s unusual T-Mobile Tuesdays app (and website) that offers deals and giveaways (there’s a free Taco Bell Tuesday, for example) to subscribers. So actually the MLB deal doesn’t begin until next Tuesday, March 26, and expires on Monday April 1 at midnight. (And if you’re trying to use MLB.TV via wireless, that will have to be a on T-Mobile-connected phone.)