Christmas Cookies Are On The Brand Menu At Hallmark Upfront 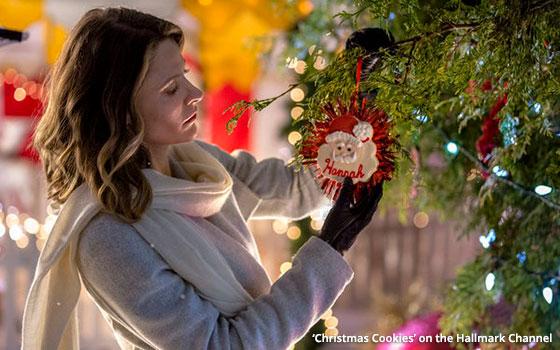 Well, what else would you expect from the Hallmark cable networks? They represent TV’s happy place -- and so it should come as no surprise that Christmas cookies are on the Hallmark brand menu for the 2019 holiday season.

The company announced a Christmas cookie-baking competition series at its annual upfront presentation last Thursday evening in New York. As always, Hallmark held its event at Manhattan's posh Rainbow Room, atop 30 Rockefeller Plaza (high above the offices and studios of NBC, as a matter of fact).

The cookie competition show, titled “Christmas Cookie Countdown,” will consist of five episodes. It will feature amateur bakers from around the country whose cookie creations will be assessed and graded by a three-person panel of prestigious pastry chefs. It will be hosted by a rotating roster of stars of Hallmark original movies and scripted series.

This reality-competition show has been earmarked for airing on the channel known as Hallmark Drama, the youngest of the three Hallmark channels under the Crown Media Family Networks umbrella. The others are the Hallmark Channel and Hallmark Movies & Mysteries.

Also coming to Hallmark Drama, and announced at the upfront is “Project Christmas Joy: Alabama” (a working title). In this reality show, also coming during the holidays later this year, “a town in need” will get “an extreme Hallmark holiday transformation,” said a press release from Hallmark.

“From an extravagant Christmas tree lighting to a Main Street makeover, this series will spread holiday cheer for a town that needs it the most.” Added Hallmark President Bill Abbott, “We look forward to bringing Hallmark holiday joy to a special town in Alabama for the 2019 Christmas season.”

Of course they do. The spreading of joy is what the Hallmark networks do, whether the joy is being spread to an Alabama town in need or to homes across the country whose inhabitants have had enough of the violent, discordant content seen virtually everywhere else in the television universe -- except the Hallmark networks.

With its family-friendly content, Hallmark occupies a unique position in television -- something the company emphasized in its upfront presentation last week.

“We are entering into the upfront marketplace in a position of strength, with our brand offering one of the most unique value propositions in the industry,” said Ed Georger, executive vice president of ad sales and digital media for the Hallmark networks, in his portion of the presentation.

“For one thing, our networks continue to see ratings growth; in fact, Hallmark Channel was the No. 1 network for all of fourth quarter among Women 25-54 and Women 18-49,” he said. “Additionally, all of our platforms, from our linear channels to our SVOD service, have become the country's most trusted and beloved destinations for celebratory, family entertainment. This trust extends to our advertisers who are facing so many challenges and uncertainties today. With Crown Media, they know they can count on high-quality programming, consistent results that deliver on expectations, and a brand-safe environment second to none.”

Fans of Hallmark's original movies and series are so numerous and passionate that they even have a name -- “Hallmarkies,” which is a rarity in television.

And now, the nation’s legions of Hallmarkies will have a place to join in the conversation about their favorite movies and series via an official podcast. The company has picked up a podcast called “Bubbly Sesh,” hosted by Hallmarkies Jacklyn Collier and Shawlini Manjunath-Holbrook (known to their fans as “Jacks and Shawl”). The podcast was also announced at the upfront last week.

The two Hallmark fans started their self-styled podcast -- now being retitled “Hallmark Channels’ Bubbly Sesh” -- in 2017. According to Hallmark, “Bubbly Sesh” became the most popular of all the podcasts (there are a bunch of them apparently) in which hosts and listeners discuss Hallmark’s content.

“We are so grateful that our podcast opened the doors to such a significant role at Crown Media and has given us the privilege to establish an incredible community of Hallmark devotees just like us,” said Shawl in a prepared statement.

And there you have it: Another happy ending for a Hallmark story. What else did you expect?