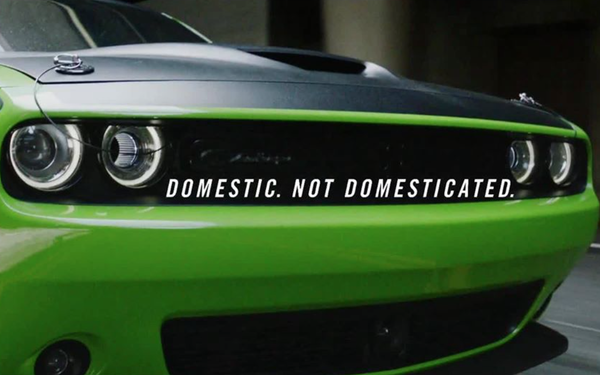 Facebook is just one giant and continuous popularity contest, and Dodge came out on top in 2018.

To see how auto brands are perceived online, online crisis monitoring firm Crisp compiled reactions on Facebook to develop its Automobile Social Reaction Index. The report is based on the analysis of 19,846 Facebook posts published by the top 50 automotive brands, from January 2018 to January 2019.

Dodge received a total of 461,187 “love” reactions on Facebook, beating Mercedes, which accrued 382,629, to be the most loved automobile brand on Facebook in 2018. While Mercedes posted a total of 869 posts, Dodge only posted 408.

“Social media engagement is all about quality over quantity,” Emma Monks, vice president of crisis intelligence at Crisp, tells DriveTime. “While other auto brands posted more than double the amount of social content as Dodge in 2018, the ‘love’ reactions Dodge attracted on Facebook over the course of the year proved that theirs were the posts that resonated most with their audience."

Car brands can amass customer engagement through aspirational posts. While many posts looked to the future, promoting environmentally friendly cars and smart technology, the most loved posts of 2018 took inspiration from the past.

Muscle cars, which dominated the American car industry in the 1960s, have come roaring back to life. Dodge’s most loved post was a video that featured the Dodge Hellcat. The Ford Mustang also got many “love” clicks with a post featuring the return of the Mustang Bullitt. Overall, love reactions to Mustang and Chevrolet Camaro posts make up 17% of their total reactions, while it’s 16% for Dodge and 13% for the Chevrolet Corvette.

There is a positive correlation between the humor of the post and the number of times it is shared, such as with both Harley-Davidson’s Start ‘Em Young, and Audi’s Christmas posts. However, the humor that characterizes Harley’s post is user-generated content, providing a sense of authenticity that may have helped the post to go viral, according to Crisp.

However, the use of humor can also be divisive when people do not share in that sense of humor.  Audi and VW had some misses last year, according to the report.

However, a high number of shares does not necessarily mean response to a post is positive. The fourth most shared post was from Volkswagen, depicting one of its cars covered in crochet squares. An actor finishes knitting a hat and completes the design by sliding it onto the car’s wing mirror. Despite the high volume of shares, the comments opposite indicate that literal-minded customers were frustrated by the perceived inaccuracies in the post.

Brands that have garnered the wow-factor are predominantly premium car brands, with Mercedes-Benz earning the top position. The Mercedes post that received the most “wow” reactions was the announcement of the company's new A-Class line.

However, the post which received the most “wow” reactions overall was not a luxury brand, but Hyundai. This company champions innovation and prides itself on having long been at the forefront of hydrogen vehicle development. Their wow-inducing post unveiled the Nexo, “The Future Utility Vehicle.”

Audi had one of the top stand-out moments on Facebook in 2018, with a holiday-themed video registering as the third most-shared auto post. It received the third most “haha” moments and sixth most “anger” reactions.

The commercial featured a Santa Claus determined to lose weight to fit behind the wheel of an Audi RS5. Comments show consumers had very strong reactions, both negative and positive.

“A key takeaway for marketers is that post reactions can be used effectively, both as an indicator of the type of campaigns that chime well with the audience and as a ‘canary in the mine’ test of campaigns which may have upset or angered customers and represent a risk to brand reputation as a result,” Monks says.