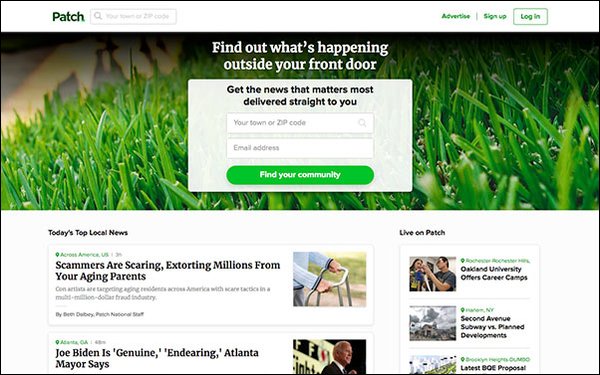 Hyper-local news service Patch is celebrating a few milestones. Its fifth anniversary since being sold by AOL to Hale Global, three consecutive years of profitability and a continuing expansion of staff and reporting capabilities.

Patch reports an 80% growth in traffic since its sale five years ago with 23.5 million unique visitors per month averaged in 2018. In addition, the company has hired 50 employees, with its staff now counting 110 full-time reporters out of a total 146 employees.

As many outlets are reporting losses and laying off journalists, Patch has found a few innovative ways to keep itself profitable, adopting the “playbook” of big tech platforms. Part of this strategy involves allowing users to contribute to journalistic conversations and user-friendly advertising through a new set of tools across Patch’s sites.

Readers are able to create threads similar to those found on social media in a Q&A forum and can also promote local businesses.

To boost its ability to post more content for readers, Patch has begun using AI bots to write routine stories covering topics like weather and traffic. This new tool allows the company to grow profitability, which gives on-staff reporters the freedom to pursue in-depth stories that serve local communities.

Patch’s reported growth comes a few months after the launch of its new customized mobile app.

Since its launch, the company reports over 200,000 downloads of the app. The app unites readers across communities by allowing users to explore news from neighborhoods outside their designated area.

At the time of the app’s launch, Warren St. John, CEO of Patch, told Publishers Daily:“Anything that makes it easier to access local news is good. Most other news apps don’t reliably surface local news, but deliver news depending on what national news is happening.”
local media, online publishing, web sites
Next story loading