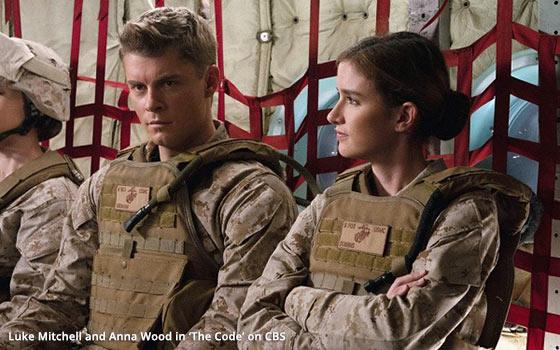 Regimes may come and go in the upper management of CBS, but someone over there has apparently survived through the years with enough influence to persist in his or her fascination with the world of military justice.

Thus, the network of “JAG” (1995-2005) and “NCIS” (2003-present) now brings you “The Code,” a new drama series about swashbuckling lawyers in the United States Marine Corps. And wouldn't you know it? They are all very good-looking.

They are uniformed military men and women with briefcases in one hand and hats worn slightly cockeyed in the style of old war movies.

They are brilliant, of course, in accordance with the CBS playbook that dictates that whatever their occupation -- be they doctors, computer whizzes or military lawyers -- the characters in the network's prime-time dramas must be geniuses who are the best in their businesses and the top of their class.

The title of “The Code” refers vaguely to either a body of law governing the Marine Corps or a code of conduct that Marines live by. It is probably both.

In the series’ premiere, a Marine officer is fatally stabbed by a lower-ranking corpsman at an outpost in Afghanistan. The case appears to be open-and-shut at first, but if it was, you would not have a show.

As the complications pile up, the young, swashbuckling lawyers of the USMC find themselves wading into a military-medical conspiracy. Will they receive a key piece of evidence via email on their cell phones while arguing the case in a military court before it’s too late? What do you think?

The fact is, a critic can complain all he wants about the formulaic nature of this show and so many others like it that fill the CBS prime-time lineup. And this is the point in these TV Blog reviews of such shows where it is customary to question how much longer CBS can continue to produce and rely on these kinds of shows that in the vast and growing scheme of small-screen entertainment, appear decidedly old-fashioned -- like TV shows that could have been made in virtually any era.

The answer seems to be that they will make ’em until audiences seem to tire of ’em. And that's that.