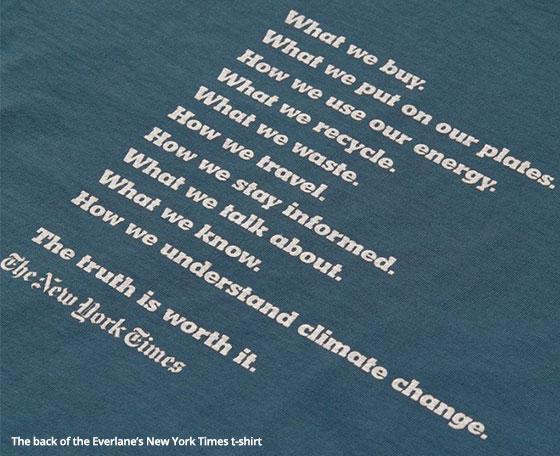 "Climate change is the most urgent issue facing our planet, and we must act now to have a planet for the future. But in order to act — we must first educate,” he stated.

Beginning April 10, Everlane will release its “Climate Collection,” which includes cotton crew T-shirts and French terry crew sweatshirts that read “Truth. It effects us all.” on the left breast. The back of the shirts lists the ways in which consumers can stay inform about how their actions impact the environment.

That includes “What we put on our plates,” “How we travel” and “How we understand climate change.”

The brand’s website, tied to the campaign, also lists “Five things to understand about climate change.”

For each product sold from the line, Everlane will provide access to the NYTimes.com for nine public school students through the publisher’s Sponsor a Subscription program.

Following the launch of the Everlane collection, The Times will air a new installment of its “Truth is Worth It” brand campaign on Earth Day, April 22. The commercial will focus on reporting by Nicholas Casey and photography by Josh Haner for an interactive story on the impact of warming seas on the Galapagos Islands.

The ad will air on linear and streaming television and across social platforms. A print and digital campaign will appear across Times’ properties, as well.

David Rubin, CMO, The New York Times, noted the collection and campaign are intended to “get the word out about the critical role independent, original journalism plays in reporting the truth about our changing climate, and that people consider subscribing to The Times to help support our mission.”

The Times launched its Sponsor a Subscription program in 2017.

Earlier this year, it reported it had reached a new milestone — delivering free access to more than 3 million U.S. students. The donations come from over 30,000 readers. Subscriptions reach schools in all 50 states at 4,000 schools in large and small districts. The Times hopes to spread the program globally.

Rubin stated the subscriptions offered through the Everlane partnership will provide students with necessary tools and information “empowering them as they enter adulthood and ultimately become the generation that takes real action to help combat climate change.”