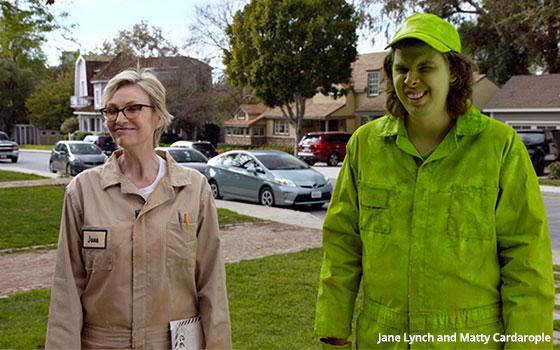 Clark Pest Control is working with A-list talent both in-front and behind the camera for a new campaign called “Green Pro.”

The creative features Emmy-Award winner, Jane Lynch, and Matty Cardarople from “Stranger Things” as they form their own pest company, "Hit the Rodents." They take their act on the road in order to show just how “easy” they think pest control is versus the reality.

The campaign is the second collaboration among Clark, Nimmea Advertising and Hazy Mills Productions, which was co-founded by "Will & Grace" actor Sean Hayes. That initial creative set the overall humorous narrative via an unknown technician named "Clark" who helps homeowners rid their places of unwanted things and people, like mother-in-laws.

The company attributes a nearly 25% jump in year-to year branded search engine traffic to last year’s campaign and is thus increasing this year’s budget by an undisclosed amount.

The family-owned Clark was acquired by Rollins in January and operates in 26 locations that serve residents and businesses throughout California and northwestern Nevada.