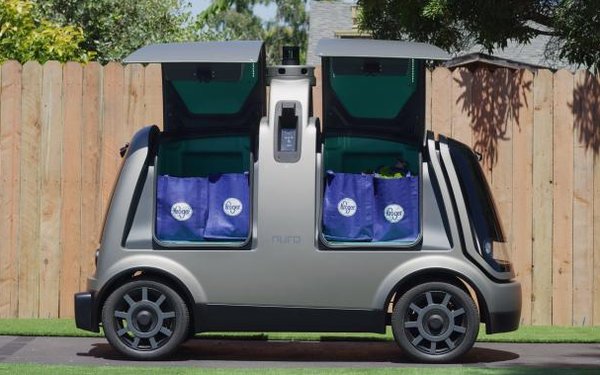 Self-driving vehicles may be better for carrying things than people.

Kroger is starting to demonstrate this in its just launched autonomous grocery delivery service in Houston.

The grocery retailer has been working with Nuro, which created a self-driving service to transport local goods.

The first deliveries in Houston are from the store on South Oak Road with two more stores set to start within the next few months.

Customers shop on the Kroger mobile app and schedule same-day or next-day delivery, for a flat fee charge of $6 with no minimum order.

Kroger and Nuro earlier tested the service in Scottsdale, Arizona, and then moved it to Houston.

The service started with Nuro’s self-driving Toyota Prius fleet, with a safety driver, with plans to move to the Nuro custom driverless vehicle later this year. That rolling device carries only things, not people.

"Kroger continues to redefine the customer experience, and we're thrilled to provide our customers with a new way to have their groceries delivered,” states Marlene Stewart, Kroger's Houston division president.

However, various automotive industry leaders have recently been backing off from any short-term visions of fully autonomous cars hitting the roads in large numbers any time soon.

Fully self-driving vehicles to carry people at scale are some time off.

The smarter action is in autonomous technology that moves actual things.