BlackBerry Messenger (It Still Exists?) Will Disconnect May 31 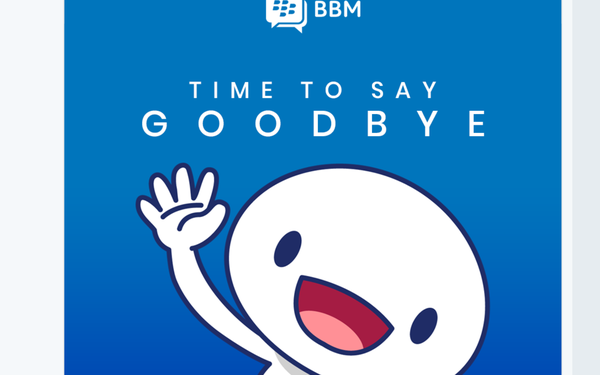 Chances are good that the very first text message you sent was via a BlackBerry phone. And chances are, when BlackBerry Messenger folds at the end of May, you won’t even remember using it.

For the first part of the 21st century, the BlackBerry phone was standard issue at many companies. By 2005, when BlackBerry Messenger was introduced, BBM -- as everybody called it -- was popular with young users and everybody else.

Even by 2012, there were 80 million BlackBerrys in use around the world. Now, not so much. Apple and Androids took over.

BlackBerry still exists -- BlackBerry Limited (formerly Research in Motion) makes its mark with single-platform security, voice encryption and privacy systems -- and it also markets what it calls the “world’s most secure” Android phones.

Separately, since 2016, the BBM consumer service has been operated by the Indonesian media company Emtek, which tried to make it more of a social media outlet. It  announced a few days ago that it would fold Messenger on May 31.

“Three years ago, we set out to reinvigorate BBM consumer service, one of the most loved instant messaging applications, as a cross-platform service where users can not only chat and share life experiences, but also consume content and use payment services,” it announced on Twitter.

“The technology industry however, is very fluid, and in spite of our substantial efforts, users have moved on to other platforms, while new users proved difficult to sign on. Though we are sad to say goodbye, the time has come to sunset the BBM consumer service, and for us to move on.”

There could be a silver lining of sorts for BBM users. After Emtek decided to leave the market, BlackBerry decided to make its business-grade BBM Enterprise end-to-end encrypted messaging platform available for individual use.

“The decision was made out of BlackBerry's respect for loyal BBM users and was not a contractual obligation,” the company explained, though it may have noticed an outpouring of support on Twitter, and the new hashtag, #SaveBBM.

"While we respect Emtek's decision, we're disappointed the platform did not thrive and grow as expected," said Mark Wilson, BlackBerry’s CMO.

The new BBMe, with privacy protections and other features, can be downloaded from Android’s Google Play Store, and soon from the Apple Store, too. It’s free for the first year, and then a six-month subscription will cost $2.49.

BlackBerry, as a consumer brand, seems to holds an odd place in the tech psyche -- some mixture of reverence for its history and ridicule for its seeming irrelevance in the current phone market.

BlackBerry counted 199 times its phones were used in TV episodes or movies as recently as 2015. Lots of those dramas, like Showtime’s “Billions” and TV’s “CSI: Cyber” and “Law & Order: Special Victims Unit” revolved around large organizations using those distinctive BlackBerrys. In fact, BlackBerry still has large contracts with NATO and just created a new subsidiary to deal specifically with the U.S government.

messaging, mobile
1 comment about "BlackBerry Messenger (It Still Exists?) Will Disconnect May 31".
Check to receive email when comments are posted.
Next story loading