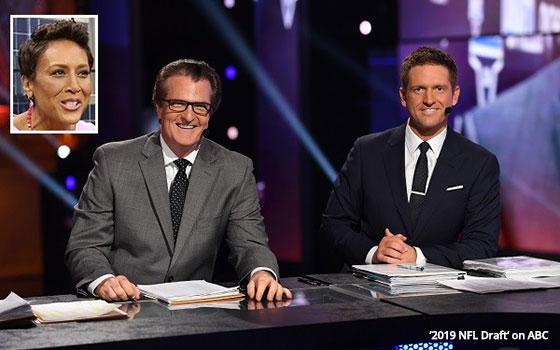 ABC intends to preempt two nights of prime time tonight (Thursday) and Friday for an unprecedented eight hours of live coverage of the 2019 NFL Draft from Nashville.

As if that is not enough, the network will carry seven hours of NFL Draft coverage on Saturday afternoon -- noon 'til 7 p.m. Eastern.

To air its eight hours of coverage on Thursday and Friday of this week, the network will forego regularly scheduled airings of some of its highest-profile shows.

On Thursday: the dramas "Grey’s Anatomy," "Station 19" and "For the People" will not be seen as NFL Draft coverage that evening stretches from 8 p.m. to 11:30 p.m. Eastern -- pushing the start of late local newscasts to 11:30 Eastern and "Jimmy Kimmel Live" to midnight.

This schedule effectively preempts not only ABC's prime-time lineup, but the syndicated “Jeopardy!” and “Wheel of Fortune,” which air at 7 p.m. and 7:30 p.m., respectively, on a number of ABC stations.

The “Jeopardy!” preemption seems particularly ill-timed, since the show is in the middle of an unprecedented winning streak by this otherworldly contestant from Las Vegas, James Holzhauer, who has won more than a million dollars and seems unstoppable.

ABC’s prime-time shows that will be preempted Friday night are the comedies "Fresh Off the Boat" and"Speechless," and "20/20," which lately has grown from a customary one-hour show to two hours on most Fridays.

This year's draft will be the 40th to be covered live by Disney-owned ESPN, but the first in which co-owned ABC will be involved. The devotion of so much network airtime, at the expense of so many of its regularly scheduled shows, must mean that ABC believes the televised NFL Draft represents an opportunity that figures to be more profitable than the shows it airs regularly.

The network's involvement is symbolized chiefly by the addition of Robin Roberts of "Good Morning America" (inset, above photo) on Night One to ESPN's regular NFL Draft coverage team, including Mel Kiper Jr. (above left) and Todd McShay.

So why all the interest now in glomming on to an annual event that was previously ESPN's alone? A couple of theories come to mind. Certainly, sponsorship opportunities are likely numerous during an event like this one, so the addition of ABC to the Disney platforms already carrying the draft coverage could mean more viewers and more money.

It is also reasonable to assume that ABC thinks viewership for the event will be worth the effort being expended to bring it to the network. It could be that ABC senses a groundswell of interest in this draft that it may not have sensed before.

Professional sports drafts are of keen interest to many, perhaps even more so in this era of fantasy sports leagues in which thousands of participants visualize themselves as stakeholders in the process of professional-team building.

The draft is of keen importance to another group too -- gamblers. Some pundits are predicting that TV networks with high-profile sports rights will tailor their programming increasingly in the foreseeable future to appeal to sports gamblers following a Supreme Court decision last May that struck down a 1992 law effectively prohibiting sports gambling in any state outside of Nevada.

“Gambling will take over TV sports,” read a headline last Saturday over a column on the op-ed page of The Wall Street Journal. “Why wait for gambling to find its way to sports fans and sports fans to find their way to the TV? Why not give them a push?” asked columnist Holman Jenkins.

In this context, Jenkins did not include this week's ABC/ESPN marathon of NFL Draft coverage. And to give Disney its due, no one at ABC or ESPN is positioning this prime-time draft programming as content designed to help gamblers make decisions about sports wagers.

It just could be that ABC thinks this draft content is something the network ought to try to support, expand, and in the process, make money from. The real challenge would seem to lie in how to make so many hours of NFL Draft picks interesting.