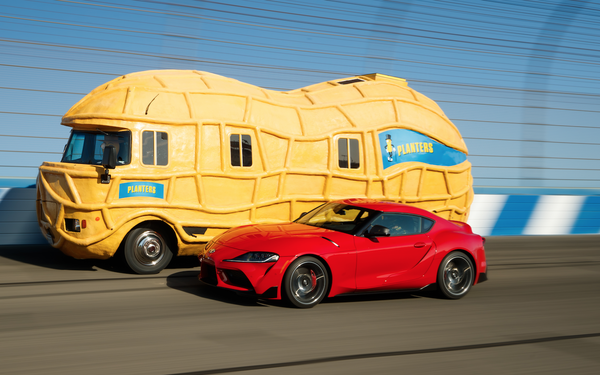 In response to Toyota’s Super Bowl TV spot, “Wizard,” Mr. Peanut, the mascot of the Planters brand, challenged the Toyota Supra to a race via a Twitter post.  Yes, Mr. Peanut.

“@Toyota#Supra vs. NUTmobile. You got the pinballs to race?” posted the @MrPeanut account, which has 33,400 Twitter followers, to Toyota, which has 758,000 followers.

The race finally happened and was captured in a 2-minute and 18-second video created by Sweatpants Media. Mr. Peanut pulled out some unexpected moves and the race ended up being close, although the Supra, driven by race car driver Fredric Aasbo, prevailed in a photo finish.

Both Planters and Toyota’s social teams, which include Saatchi and Saatchi on behalf of Toyota, posted the video on channels today including Facebook and Twitter. Auto magazines MotorTrend, Automobile and Hot Rod all had some tongue-in-cheek responses to the post, offering up other prospective competitors for the Supra.

The real winners in this historic battle of Supra vs. Legume are the charitable organizations chosen by each brand. Planters will donate to The Movember Foundation, while Toyota will ante up for the American Heart Association and the Bob Woodruff Foundation.

The 2020 Toyota Supra will be available in dealerships in July.