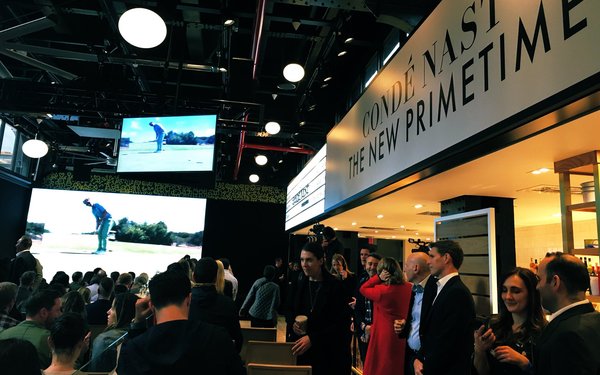 The Condé Nast NewFront was short, punchy and to the point, making clear it has its sights set on a young, cord-cutting audience.

Chief Revenue Officer Pamela Drucker Mann touted the media company’s ability to “leverage influence and access to take audiences where they haven’t been before.”Condé Nast tried to drive its singular message home: The company is transforming from a publishing company to a global media company,” Drucker Mann said.

“We are the new Thursday night, and we are always on," Drucker Mann said.

The media company announced it has 50 returning digital video series and more than 175 pilots in production, slated to release over the next year.

One of the shows is called “Go Ask Anna,” where people on the street are interviewed to ask Vogue editor-in-chief Anna Wintour life and fashion advice.

Wintour appeared on stage for a live Q&A, one hosted by Samantha Barry, editor of Glamour. Wintour said the two most inspiring people for her at present are New Zealand prime minister Jacinda Ardern and presidential candidate Pete Buttigieg, though she is not endorsing him.

On the video front: GQ is getting a sports channel on YouTube. Condé Nast created two new over-the-top streaming channels this year for Wired and Bon Appétit.

Mann posed two important questions to the audience of marketers and advertisers about digital video: Is the content good,? Will you pay for it?

Condé Nast partnered with Nielsen to provide third-party measurements and commissioned a study from the metrics company that found an average 15% lift in brand familiarity and 36% lift in purchase intent from its digital video audience.

Drucker Mann talked about just one example of a new advertising option: Prime Placement, where brands can partner with Condé Nast on product placement in its digital video content. For example, a partnership with Yeti and “It’s Alive” with Bon Appétit’s Brad Leone featured a Yeti cooler keeping meat cold.

Condé Nast also announced an expansion of its “ Condé Nast Prime” offering to “Conde Nast Prime Time,” which will offer over 300 hours of content on all platforms, including YouTube and OTT channels for video inventory.

Millennial and Gen Z audiences are “watching content, not the platform,” Drucker Mann noted. Condé Nast will focus distributing content on YouTube and its OTT channels, where this young audience is searching for video.

A lot of Condé Nast’s video success comes from its access to talent, influencers and celebrities.

Oren Katzeff, president of Condé Nast Entertainment (who joined from Tastemade last year), said singers like Rihanna and Halsey had the biggest non-music video viewer numbers on YouTube from content produced by Condé Nast, such as a video of Rihanna putting on her make-up for Vogue. It has 21 million views.

Another new show, from Glamour, will be called "Closet Confidential," will star Tan France, from Netflix’s “Queer Eye,” as he analyzes people’s closets.

At the end of the presentation, pop singer Charli XCX performed her two hit songs, “Boom Clap” and “1999.”