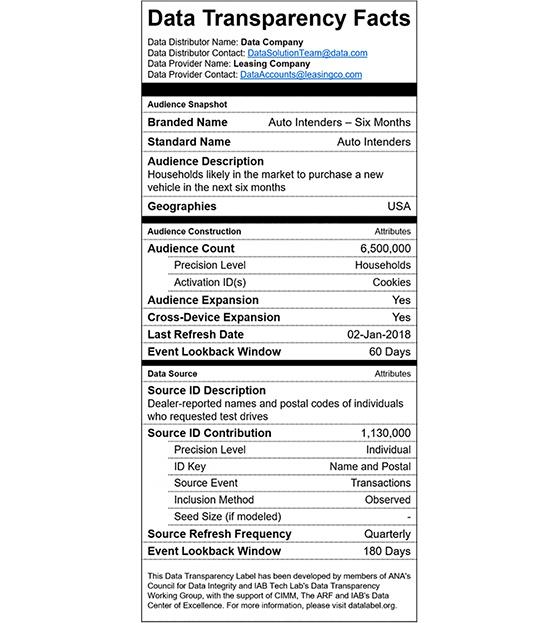 Publishing giants Meredith Corp. and Hearst Magazines are the first publishers to commit to adopting the IAB Tech Lab data transparency label. The transparency label is part of a compliance program scheduled for release later this year.

The label has been compared to a nutrition label for food. Through the establishment of minimum disclosure requirements, those making data available to buyers must address key determinants of segment quality, such as age, provenance and segmentation criteria.

As a result, advertisers are able to make more informed decisions about the data they use.

"We are committed to transparency across the supply chain ... we hope to encourage advertising partners to demand this level of transparency from all their data and publisher partners," stated Alysia Borsa, Chief Marketing and Data Officer at Meredith-co-chair of the IAB Tech Lab Data Transparency Standards Working Group that developed the standard.

A goal of the standard to is make the process of making apples-to-apples comparisons and measuring performance across partners exponentially easier and inspire other publishers to adopt the standard.

A beta version of the label was released last fall by the IAB Tech Lab, the Association of National Advertisers’ Data Marketing and Analytics division, the Coalition for Innovative Media Measurement and the Advertising Research Foundation, with a six-month public comment period.

During that time, those groups, plus a working group that included Acxiom, Experian, MetLife and the U.S. Postal Service, among others, and a leadership committee comprised of LiveRamp, MediaMath, Neustar and Oracle Data Cloud collected feedback and boosted the program to other data players.