That AT&T Banner Will Make A Nice Backpack 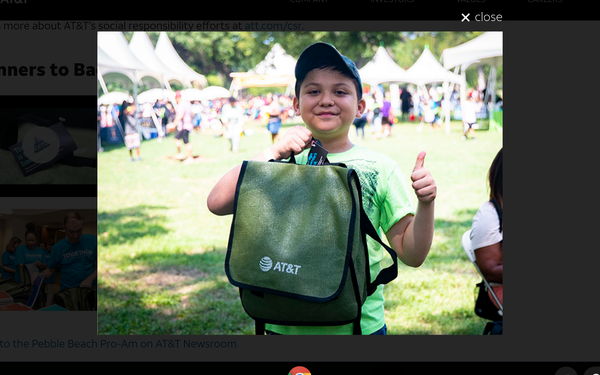 After the AT&T Byron Nelson golf tournament ends on Sunday, workers won't just rip down the fabric-based corporate signage. They’ll send it on to be made into backpacks.

That’s 30,000 square feet of the sturdy scrim material used on everything from signs and bleacher decorations to grass-protective walkways for fans.

It’s the second year AT&T has turned that stuff into backpacks -- and it expects to make at least 1,000 of them. They will be distributed to needy kids in San Antonio, Houston and Dallas, where the tourney takes place.

This promotion doesn’t feature any commercials, and the topic is lighter. But, as an environmental effort, it shows the company’s consciousness.

Nicole Anderson, AT&T associate vice president for citizenship and sustainability, says the organizers will end up with about four tons of material from the event. Part of it is recycled and the rest is “upcycled” into the backpacks.

Because the last day of the tournament falls on Mother’s Day, AT&T is also distributing a bunch of pink goodies to moms in attendance.

AT&T also worked with AT&T-sponsored golfer Jordan Spieth to produce a pink-colored golf bag he’ll use during the tournament. Then he'll sign and donate it to the Operation Shower charity, which will use it to raise money to help provide baby showers for military wives who are moms-to-be.

The “Banners to Backpacks” campaign featured other early pioneer products. The bibs used by caddies in the 2015 tournament were turned into plastic lanyard ID pouches used by the golfers and the media at the next tournament.

Bibs from last year’s Byron Nelson tournament at the Trinity Forest Golf Club were turned into zippered pouches filled with golf tees and given away at Pebble Beach Pro-Am, also sponsored by AT&T, in February.

AT&T seems to be otherwise getting its money’s worth from its association with the Byron Nelson tournament. The first two days of the competition aired on the Golf Channel, and Saturday and Sunday’s rounds will be on CBS. In addition, AT&T-owned DirecTV is promoting special 4K HDR transmissions from the last three holes each day.

The idea of reusing advertising material isn’t brand-new. AT&T has a ways to go before it can match the tonnage from Rareform, a California company. It claims it’s taken over two million pounds of old billboard vinyl signs and turned them into colorful tote bags and wallets made from fragments of the old advertising.