Delivering on the Dunkin' Brand Promise 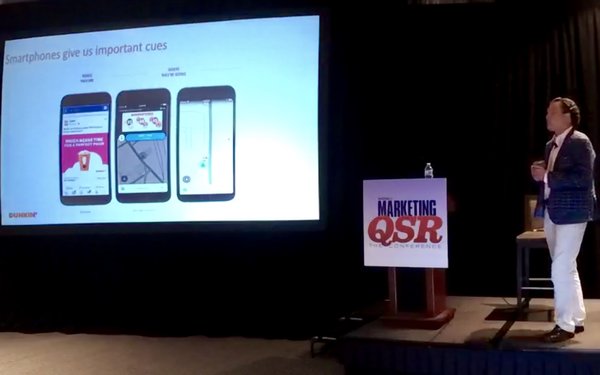 Keith Lusby, vice president of media at Dunkin' Brands, had three tips on how to treat customers when he spoke on Thursday at Marketing:QSR.

1. Speak their language. Changing the brand's name to simply Dunkin worked out well, Lusby said, delivering the most coverage in brand history last year. Another way they personalized was to bring back Irish cream flavor after finding four-year-old tweets raving about it. One way it countered category-leader Starbucks was to make a better espresso. It put millions into the product and came up with a simple tagline, "Sipping is Believing."

2. Go places they like to go. Partnering with Waze allowed Dunkin to offer in-app ordering so that they can get something fast and easy. Also, when it rains, Dunkin can change its promos to something more comforting like lattes.

3. Be useful. In Boston, Dunkin billboards proclaim, "Our monsters are green, our coffee is Dunkin." It will do similar local takes in New York and Philadelphia this year. It also ran a local ad during a Bruins game. Yet, last week during another game, the announcers talked about the ad for 30 seconds. "Little things matter," said Lusby.

Although QSR Magazine named Dunkin the Most Transformational Brand for 2018, Lusby said the brand is not the most technological company. "But simple things give the perception that we are."

It had its best first quarter in over 3.5 years. So, he said, traffic is bad, brand love is good. "Using the right language, the right tools at the right time does more than we think.