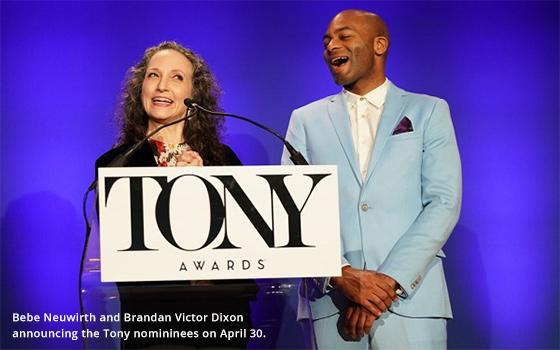 It is time once again for the Tonys, that annual televised awards show that honors a form of entertainment few can afford and celebrates a part of town that New Yorkers do their best to avoid.

Please give our regards to Broadway, which we would do ourselves if we had any plans to go anywhere near it -- which we do not.

Visitors to our city continue to throng to the midtown theater district, however, despite the crowds, fake Disney and “Sesame Street” characters accosting their children and restaurant meal tabs that amount to highway robbery.

This is to say nothing of the high cost of Broadway show tickets amounting to hundreds and hundreds of dollars for a typical family.

This is the world that it is to be celebrated by the Tony Awards, airing live on CBS from Radio City Music Hall, which is not a Broadway theater. The host will be James Corden, host of “The Late Late Show” on CBS, where he is best known for singing duets with various recording stars while driving.

The Tony Awards, like “Broadway” itself (the concept, if not the actual avenue that cuts diagonally through the length of Manhattan), has its fans, although it may or may not be appropriate to describe them as “legion” -- at least not as compared to moviegoers or the largest group of entertainment consumers there is, TV viewers.

Here in New York, the Tony nominees and their chances of winning have been discussed and dissected for several weeks now by various interested parties -- ever since they were announced April 30.

These steadfast Tony handicappers include theater critics (a group not yet extinct, believe it or not) and other theater-beat journalists in the papers and magazines (what's left of them), and panelists assembled on a handful of locally made TV shows covering the theater that you stumble across at odd hours.

For this group, the Tonys are like their Super Bowl or World Series. Speaking of major league sports championships, the Tonys will dodge a bullet this year, as no NBA Final game is scheduled for Sunday night on ABC (the next two games in the series pitting the Golden State Warriors and the Toronto Raptors are Friday and Monday).

This will not necessarily lay a foundation for the Tonys to reap ratings riches, however. Last year's show drew 6.3 million viewers, which is not too bad for a Sunday night in June for a show honoring theatrical entertainments that few in the viewing audience will have heard about, much less seen.

Among New York City residents there are certainly coteries of people who would label themselves Broadway fanatics and who are sure to tune in for every moment of this three-hour awards telecast on Sunday night.

But like most of the Broadway shows themselves, the Tonys might be of even more interest to out-of-towners contemplating a trip to New York this summer. To them, we city residents can only say, “Welcome to New York … and please -- be careful out there!”