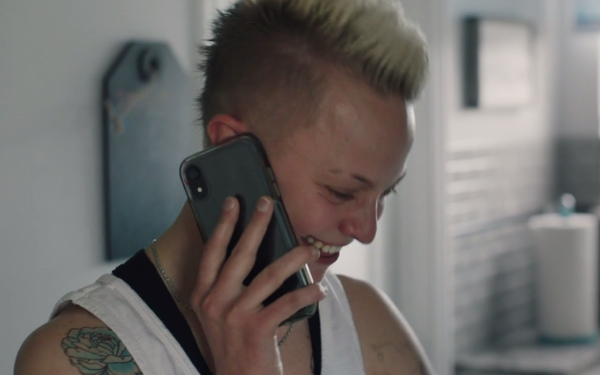 Last year for LGBTQ Pride Month, Verizon produced a tearful one-minute video that showed several young people calling their parents to inform them for the first time that they’re gay. The YouTube video also showed up on the MTV Music Awards.

All those phone calls “end happily, if occasionally tearfully,” as MediaPost reported.

But these kinds of conversations don’t always end like that, and this year Verizon revisits the idea, this time by connecting parents and loved ones with LGBTQ folks who had nastier conversations the last time they talked about it.

On the second time around, both sides are able to say what they meant to the first time, or make amends for any negative comments they did make. This latest video is directed by Lee Hirsch, who also directed the award-winning 2011 documentary “Bully.” The new 3:15 Verizon video is called “Love Calls Back.”

“Me and my mom were always BFFs until I called her and told her I, like, want to date a girl... and she lost it,” says one young woman speaking to the camera. Says her mom, also just to us,  “It was a shock. It’s not what I wanted for my daughter.” But ultimately the mother says, “She has to live her own life and do what she wants. I haven’t said that to her -- but I think that would have made a big difference.”

The video cuts to Mom trying again. Now on the phone, she tells her daughter, “You know when you first called me, I should have told you how much I loved you then,” and adds a little later, “Whoever you bring into this home will have my love also.”

A version of that scene plays out between a brother making amends with his transitioning brother, and two other moms making up to their “out” sons. As one mom speaks via a video phone call, her son rubs his forehead. Mom tells him, “Stop touching over there. You’re going to make a mark on your face.” He laughs and then cries, and says, “Oh, ma!”

If all phone conversations were like that, Verizon could market handkerchiefs.

Andrew McKechnie, chief creative officer at Verizon, gives a lot of credit for the video to PFLAG, the national group that makes it its business to try to reunite families with LGBTQ sons and daughters. Last year, Verizon donated $250,000 to the organization -- and will donate an unspecified amount this year as well.

“For us the process behind the scenes was to find families who wanted to reconnect,” McKechnie explains. “Maybe they’ve had other discussions, but not about that first conversation. It’s like,  ‘You know that call? I wish it had gone differently.’ “

For last year’s video, he says, “For every call that is successful there are a lot of calls that really didn’t go all that well.”.

Verizon has a fairly substantial track record supporting gay causes. It will have a major  presence at local Pride parades nationwide this month, and along with being the title sponsor of the LA Pride events in that city, will host the U.S. premiere of the documentary “5B,” about the men and women who cared for patients in the first HIV/AiDS ward at San Francisco General Hospital, way back in 1983. It’s a presentation of Verizon’s Ryot media company.

Lately, companies have begun to be criticized for being a little too boastful about their do-gooding efforts. McKechnie says the “Love Calls Back” video may not be recut so it can be a typical commercial, so it doesn’t appear Verizon has a made an ad instead of delivering a more sincere message.

“I mean, it’s important for any brand to be honest. “ he says. “Consumers see right through that if a brand is not being authentic.”