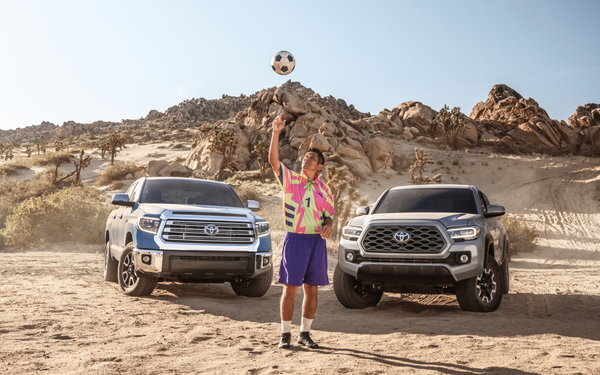 Toyota is returning as the official automotive sponsor of the Concacaf Gold Cup soccer tournament and is launching a multifaceted campaign built around soccer and toughness.

The effort, from Conill, features the Toyota Tacoma and Tundra pickup trucks and a partnership with retired Mexican soccer legend Jorge Campos. A prominent player in the 1990s and 2000s, Campos was known for his acrobatic style of goalkeeping and his colorful playing attire.

“This campaign champions the relentless spirit of those unafraid to conquer even the toughest terrains, just like our Tacoma and Tundra trucks,” states Terry Sell, national truck manager, Toyota Motor North America. “From international to home field games, we’re looking forward to an exciting soccer season as we celebrate the determination and toughness of the game, its players and the fans.”

Fans will have the chance to engage with digital content on Toyota Latino social platforms, including a series of videos starring Campos demonstrating difficult soccer techniques,  while encouraging soccer fans to choose their toughest fields with the hashtag #CanchaDificil (#ToughestField).

“Those tough fields are where players exhibit their true potential, just like Tacoma and Tundra,”  Elizondo tells Marketing Daily. “Jorge Campos is the perfect partner for this campaign, as someone who truly represents the all-terrain-ready spirit.”

Toyota is also partnering with Copita Toyota Alianza, which showcases the best youth soccer teams in the United States. The partnership includes an interactive footprint of activities and special guest appearances. The tournament started in Atlanta in May and continues through October.

Continuing the success of last year’s Tour Aguila, the automaker is also again partnering with Club America for another series of matches in the U.S. Tacoma and Tundra will be there for all of the pregame activities at the Fiesta Futbolera presented by Toyota.

Toyota is also engaged with a variety of other popular soccer properties including Liga Mexicana, the United States men's national soccer team and Union of European Football Associations Champions League, with broadcast integrations during telecast games.