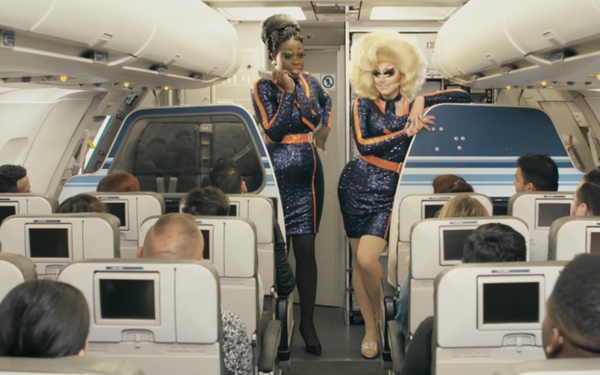 The airline announced a series of special events that highlighted its ongoing support for various LGBTQ organizations throughout Pride Month and throughout the year as JetBlue celebrates World Pride.

“Every day, but especially as we celebrate World Pride in our hometown, JetBlue values the uniqueness of each and every individual -- not only because it’s the right thing to do in keeping with our integrity value, but because we think it’s more fun that way, too,” Geraghty states.

The airline is debuting a video featuring drag queens Bob the Drag Queen and Trixie Mattel. The pair demonstrate JetBlue customer-friendly favorites like the most legroom in coach and free unlimited brand-name snacks. The video is available on “RuPaul’s Drag Race,” VH1 and JetBlue social media channels.

Additionally, during the week of June 10, “RuPaul’s Drag Race” celebrated Pride Month and the newly named plane with a terminal takeover at JetBlue’s T5 at New York’s JFK International Airport. This week, customers passing through T5 will see iconic photos, displays, Instagram opportunities and the “fiercest” RuPaul quotes in drag race HER-story. The takeover also lets travelers touch up their runway looks at a hair and makeup station and send special postcards to spread the World Pride love.

JetBlue’s “Shantay Blue Stay” aircraft will operate on a variety of routes throughout the JetBlue network in the U.S., Caribbean and Latin America.