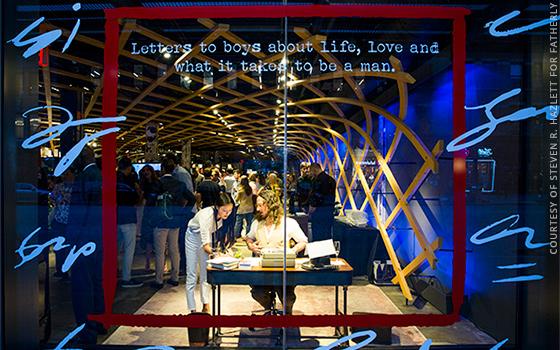 Publishers Fatherly and Gear Patrol hosted events this week in anticipation of Father’s Day this Sunday, with the help of brands aiming to reach a young, male audience.

Fatherly, a parenting site targeting millennial dads, teamed up with Gillette for a pop-up event in Chelsea and branded content on its site.

On Thursday, Fatherly and Gillette launched "Sincerely," a free exhibit that aims to encourage men to rethink how they are preparing boys for adulthood, with letters from celebrities, writers and activists.

The display was inspired by a digital content hub called "Letters to Boys," also created in partnership with Gillette. The letters — written by people like rapper Common and actor Luis Guzmán — give advice to their sons on different topics, such as self-worth, bullying and masculinity.

“Digital publishing is just one channel for delivering our content,” Fatherly CEO-cofounder Mike Rothman told Publishers Daily. “We thought an experiential program was most appropriate for creating actual space for reflection and dialogue between parents and their kids.”

A VIP event held on Wednesday featured a panel and participants like Gillette CEO Gary Coombe and author of “How to Raise A Boy” Dr. Michael Reichert and former Giants linebacker Mark Herzlich on fatherhood and how they are trying to raise their boys right.

Separately, Gear Patrol and Dyson hosted a Q&A on Wednesday at the Dyson Demo Store. Dyson sought to reach a mostly male audience, which correlates with Gear Patrol’s readers, according to the publisher.

The audience tested Dyson’s products at the event, where “multiple products” were purchased, according to Gear Patrol.