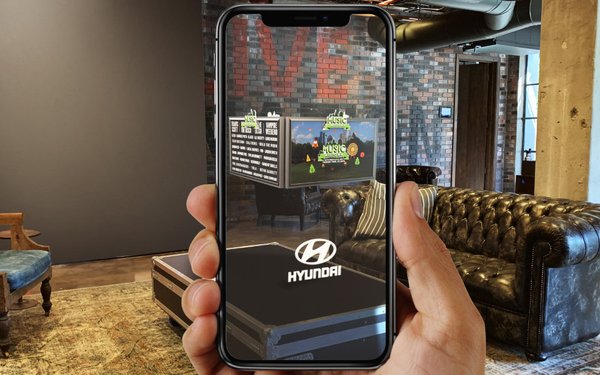 Concert promoter and ticket hawker Live Nation will make it possible for fans to see live performances from Atlanta’s 25th Annual Music Midtown Festival this September by downloading an app that will stream video wherever they are.

That’s assuming fans will have a flat surface handy, which is needed to project a three-dimensional, four-sided view of the performances, via Live Nation’s new AR LIvestream. The Music Midtown AR event will be sponsored by Hyundai, which will use the same live stream to show off its 2020 Sonata, also in 3D.  Live Nation isn’t beaming the entire festival via AR, just selected parts of it.

Live Nation made the announcement at the Cannes Lions International Festival of Creativity, and unveiled a grab bag of new customizable AR products. Those include:

-- AR Fest Lens, which lets concert attendees point their smartphones toward any of the stages at the festival that will remind them which artists will be showing up there.

-- AR Intermission, which lets brands play with AR during breaks in the show.

-- AR Photo App, which lets fans at the concert use branded backdrops fancied up with AR filters and 3D artwork that can be shared via social networks.

Like most brands -- and particularly ones that count young people as its best customers -- Live Nation is trying to integrate itself more fully on mobile devices, and take advertisers along with it.  Augmented reality features have the benefit, at the very least, of being new enough to attract gawkers and cool enough to stand on their own with new consumers.

And Dean Evans, CMO for Hyundai Motor America, said a big AR tie-in was just the right medium for what he called the company’s “most technologically advanced sedan ever.”

AR might have a rich future with live events. Eminem and U2 used AR during concert performance, and the PGA Tour was an early AR adoptee, letting duffers at home experience golf courses at home, again superimposed on flat surfaces. Hyundai created its own AR-infused owners’ manual as well.