Obese Nation Can't Get Its Fill Of Unhealthy Food Shows 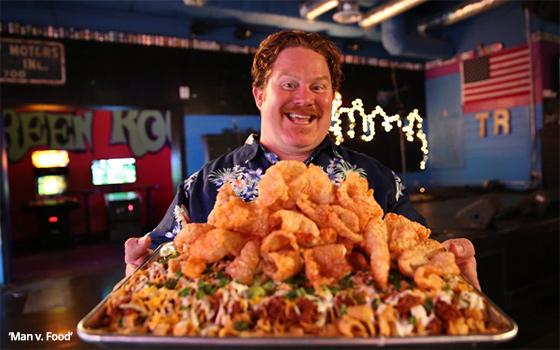 In the battle of man vs. food, food appears to be winning.

That is one of the takeaways from a lengthy newspaper story over the weekend that reported on the rise of heart disease in America stemming from obesity. One thing the story did not explore: TV’s role, if any, in promoting the consumption of unhealthy foods.

According to the story, which started on the front page of Saturday’s Wall Street Journal and went on for considerable length on an inside page, a successful, decades-long battle to reduce the incidence of heart disease in America appears to no longer be working.

Fatal heart attacks and strokes resulting from heart disease are on the upswing, the story said, and they are afflicting younger people too -- both men and women. The cause is the continued increase in the percentage of Americans who are simply overweight, plus those whose weight classifies them as obese. As a percentage of U.S. population, both categories are growing, the story said.

The story notes how a concerted effort on the part of government health authorities led to a largely successful battle against cigarette smoking.

The success of that effort, which has spanned decades, has been integral in reducing heart disease in America. And as anyone with a grounding in TV and advertising history well knows, cigarette ads on TV were banned in 1970 -- contributing to the campaign to decrease smoking and, by extension, heart disease.

Today, though, skyrocketing obesity rates are a root cause of the high incidence of heart disease, according to the WSJ story.

The story did not mention television’s role in the promotion of unhealthy eating. But anyone with even a passing familiarity with the menu of food shows prevalent on basic cable today can understand how TV might be influencing a generation of food enthusiasts to eat whatever looks good, with nary a moment’s thought given to the health consequences.

On show after show on channels such as the Food Network, The Cooking Channel and Travel Channel -- now all owned by Discovery -- viewers are encouraged to consume the most fat-laden foods imaginable. There is even a show on The Cooking Channel called “Man v. Food.” In the photo above, provided by Discovery to promote the show, this platter piled with fried food can hardly even be identified. And yet, viewers are urged to watch in wonder as host Casey Webb stuffs himself with it.

No negative word is ever heard on numerous food shows about the near-constant parade of one-ton burgers slathered in cheese and thick bacon strips.

Instead, the chef-owner’s prowess in curing his own bacon, and the generous servings of each fat, artery-clogging slice he provides to his restaurant patrons is celebrated again and again. Then, those very patrons happily inform the show’s host that they love this guy’s bacon and they return again and again for more and more of it.

Meanwhile, when encountering these shows such as Guy Fieri’s “Diners, Drive-Ins & Dives” on the Food Network, I’m wondering: Whatever happened to the anti-cholesterol craze of 20-odd years ago?

Don’t tell me these TV shows don’t influence people to seek out these kinds of foods and then eat them without thinking about the health consequences. TV is the “influence medium.”

Those who sell its virtues to advertisers make this claim every day. But then, when questioned about whether or not they think the contents of their shows are in any way influential, TV’s powers of persuasion suddenly evaporate.

In much the same way that the home-buying and renovation shows on HGTV (also now owned by Discovery) have changed the way many Americans house-hunt, the food shows that celebrate street food, fried food and carnival food are undoubtedly playing a role in the nation’s obesity epidemic.

Perhaps the same thing can be said of TV itself. We are a nation of sedentary couch potatoes who watch too much television and then for fun, we go out and eat the unhealthy foods that our TV shows and commercials celebrate. Bon appetit!