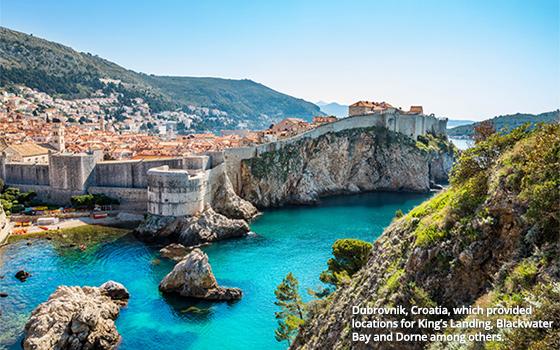 HBO’s “Game of Thrones” may have ended this spring, but the series’ lasting impact can still be seen worldwide, especially in tourism. The brand extensions of 'GOT' are proving lucrative, underscoring the economic power of TV brand engagement.

Forbes reported earlier this year that officials in the Croatian city of Dubrovnik believe “Game of Thrones” brought in half of the 10% rise in tourism the city has recorded. The city recorded so many tourists in 2017 — with 750,000 people coming ashore via 539 cruise ships — that it instituted a plan to limit the number of tourists to Dubronik’s Old Town to 4,000 at a time.

Dubronik was the main filming locationfor King's Landing, a fictional city in the acclaimed series.

In fact, Croatia counts more than 4,500 “Game of Thrones”-themed tours.

Expecting the fervor to continue, Cruise Croatia will launch a “Game of Thrones” tour next summer poised to set sail one time only and and open to 38 lucky guests.

Northern Ireland is reported to have added nearly $40 million in tourism dollars annually, thanks to 'GOT.' Fans across the globe pay homage to favorite locations in the country, including the Haunted Forest and the Kingsroad.

John McGrillen, chief executive of Tourism NI, told The Irish Times that "Game of Thrones" had dramatically “changed the perception of Northern Ireland” as a tourist destination.

Another HBO limited series “Chernobyl” is sparking a similar trend.

Following the launch of “Chernobyl,” a five-part series about Ukraine’s 1986 nuclear disaster, tourism to the site increased by 40%, reports IndieWire. The area surrounding the destroyed reactor is now a destination.

SoloEast, a company that hosts tours of the site, reported a 30% increase in guests visiting the area in May, compared to the same month last year. Chernobyl Tour also saw a double-digit increase of 30% to 40% since “Chernobyl” aired.

Along with those increased numbers comes, of course, an influx of Instagram photos. Last month, a Twitter user loaded screenshots depicting tourists at Chernobyl taking gratuitous photos, citing an influx of influencers to the site.

However, his claim was debunked. Three of the four photos he showed weren’t taken by influencers, but by random visitors to the site, with one revealed to be an image that has been shared since 2010.