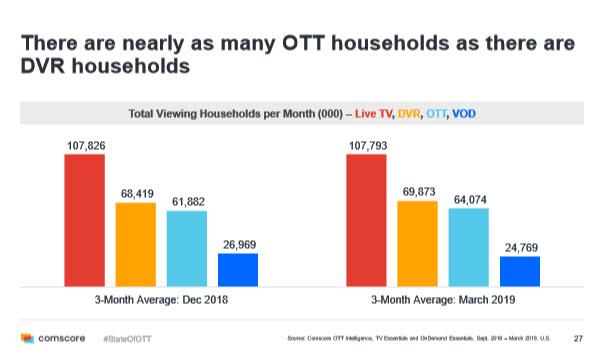 Among the many positive indicators for OTT in Comscore’s newly released 2019 “The State of OTT” report is the platform’s imminent surpassing of DVR tech.

According to the report, based on March 2019 data, the number of households with connected TV has nearly caught up with the number with DVR.

In December 2018, the three-month averages for DVR home and connected TV homes were 68.4 million and 61.9 million, respectively — a gap of 6.5 million. As of March, DVR homes had increased to 69.9 million, but CTV homes had leapt to 64.1 million—meaning that the gap had shrunk to 5.8 million.

Moreover, when it comes to time spent, CTV has now officially blown by DVR. As of March, CTV viewing hours per month hit 5.5 billion, edging out DVRs’ 4.6 billion.

(In looking at those stats, it’s important to keep in Comscore’s definition of OTT in mind: Any Internet-based video content streamed on a device that can connect to a TV or via functionality within the TV itself, i.e., smart TVs. It can include programming from subscription video-on-demand services, ad-supported services, free VOD, and transactional VOD such as iTunes.)

A few of Comscore’s other OTT stats:

Overall, average streaming video to TV time is up to 86 hours as of March, compared to an average 50 hours in February 2018.

Similarly, the vMVPD (virtual multichannel video programming distributor) market, while still growing at a pretty impressive clip, is slowing down. As of March, YoY growth in the number of Wi-Fi homes with vMVPD service was at 21%. In comparison, Comscore’s comparison of March through May 2018 versus the same period in 2017 found 48% growth.

Looking at most of the stats surrounding OTT, it seems tantamount to heresy to imagine that the future could bring anything but more go, go, go.

Still, given the speed of change in technology and the field of players, and consumers’ growing openness to both — and perhaps most important, consumers’ track record for changing behavior in response to changing advertising models — maybe it’s never wise to assume inevitability?

“People liked VOD until fast-forward started to be disabled. Then they went back to DVR, where they can still skip ads,” pointed out Susan Engleson, Comscore’s senior director of product, in her presentation of the 2019 OTT report.

Engleson’s ending question: “Could OTT be the new DVR?”

Well, there are a number of giant corporations betting billions that OTT will dominate the media landscape in the years ahead — and that in and of itself is probably enough to determine the direction of the marketplace.

At least for the foreseeable future, perhaps the bigger underlying question is whether ad-supported, subscription-based or some hybrid will ultimately dominate OTT.

As we know, on the AVOD side, the growing number of competitors includes Hulu (hybrid), Tubi, Xumo, Pluto TV and the soon-to-come platform from NBCUniversal. On the sub-based side, Netflix, Amazon, Hulu and the others will soon be competing with entries from Disney, WarnerMedia and Apple.

Most analyses seem to skew toward the effects of age. But how much might economic factors come into play?

Some of Comscore’s data seem to raise questions on that front. 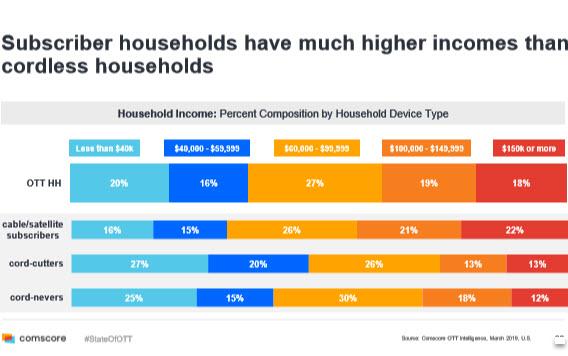 Combine that with recent reports of subscription video “fatigue,” and evidence of thresholds relating to both money and time (how many will be willing to use more than four or five services, never mind that many or more paid services?), and you being to wonder about how fast either ad-supported or free models can really grow, amid multiplying players.

On the ad-supported side, advertisers more interested in targeting more affluent consumers will want to see that group’s share of users grow considerably over the next few years. That could certainly happen… the opportunity is there, at any rate. Or might those who can afford ad-free services go in that direction more and more, a la concierge medicine?

On the sub-supported side, with the income inequality divide wider than it’s ever been (and still to some extent limiting lower-income consumers’ access to digital technology), won’t SVOD platforms need to rely heavily on a relatively small portion of the population to support these services?

Just asking. I imagine the big players have crunched those numbers and projected out successful models for decades…or maybe they’re confident that economic challenges will soon be a non-factor.