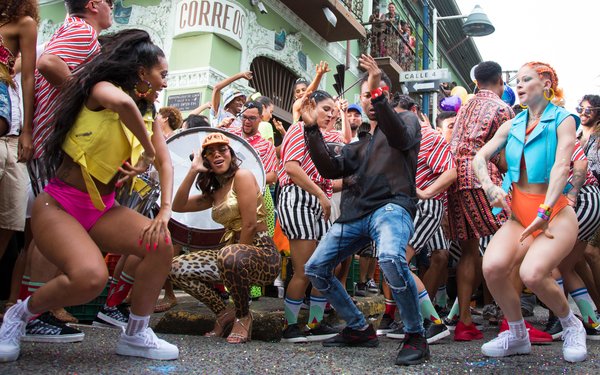 Few alcoholic drinks scream summer the way rum does.  So it makes sense that  Bacardi’s new ad in its “Pass the Beat” campaign features a sexy Latin-beat single called “Make It Hot.”

Part of the song gets performed in the commercial, and the longer version on a YouTube video, by Brazilian pop star Anitta and electronic dance music band Major Lazer.

“A lot of those platforms, the gifs, the music and cocktail video, are all intended to be more social in nature.”

The ad also aired during one of the commercial breaks in the Argentina vs. Brazil Copa America tournament game last week (a good placement because Anitta is a huge star in Brazil). And Bacardi scheduled the ad during the Home Run Derby the day before Tuesday’s Major League All-Star Game in Cleveland.

The “Pass the Beat” creative was from BBDO.

There’s not a word of English in the commercial, until the very end, when the Bacardi logo shows up with the advice, “Do What Moves You.” But an English-language viewer probably won’t mind at all.

“Bacardi is something that is generally had outdoors, at a pool party, at a concert. We think our commercial is very Baccardi that way, and very rum,” says Duggard.

Summer isn’t the only season for rum. There’s also Christmas, when rum-fueled eggnog is a popular libation.

It’s almost ancient history — but, it was once much tougher for a distilled spirits drink like Bacardi to get major exposure, because, through 1996, the major TV networks wouldn’t air liquor commercials and neither would most cable networks. And social media didn’t exist.

Duggan, who’s a 14-year veteran with the Bacardi company (which owns Grey Goose, Patron and Bombay among other brands) concedes,  “Certainly in regard to cable TV and the way the digital world has opened up, it’s been easier" to promote the brand. “But we are very aware of where our ads are seen and making sure people are of the legal drinking age.”

And liquor brands have discovered concerts and festivals in a big way. Bacardi partners with the Governors Ball, Bonnaroo and Life is Beautiful festivals. With Live Nation, it also produces the Sound or Rum concert tour, where, in fact Major Lazer was a headliner in 2017.